The Clydesdale In Winter 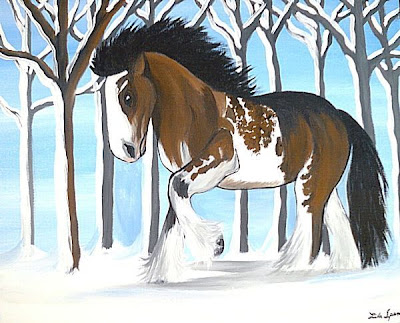 I have known for a long time that my bathroom scale is wildly inaccurate.  Perhaps I have kept it only because it flatters me.  Last Friday, for example, it said I was a full 10 pounds lighter than what I know my true weight to be.  And I know my true weight because earlier on Friday I had my annual physical exam at the doctor’s office.  I trust the accuracy of the doctor’s scale, especially since it confirmed the readings I have been taking on each visit to Planet Fitness.  I don’t know that anything can be done for the bathroom scale.  It’s old and wasn’t very nice even in its youth.  I really use it only to see whether I am gaining or losing; I think it is accurate enough for that, at least.

My current weight is 202, down 1 pound from last January’s physical exam.  And that’s 3 pounds less than the 205 I posted at the end of 2010.  What the doctor doesn’t see is that I’m something like 8 pounds heavier at this time of year than I am in the middle of summer.  Every year I tell myself not to gain weight over the holidays, and every year I fail.  I guess if there’s a silver lining, it’s that I’m slowly reducing the severity of my winter weight gain.

As I move up to Cat 2 for mountain biking, it’s tempting to retain just enough weight to race as a clydesdale.  I’d be one of the “little” guys, a comparatively trim 200-pounder floating away on every hill.  But in the summer I would always be eating my way up to 200 pounds.  And I wouldn’t be approaching my full potential as an athlete.  And WORS isn’t the be-all, end-all.  Being fast for a big guy will bring no reward in most of the other events I’m considering.

WEMS, for example, has no clydesdale category.  Its results are based on race duration and on gender, without regard for age or ability.  Being one of the oldest racers will be enough of a handicap; I don’t need to be one of the heaviest too.  WEMS announced its 2013 schedule today and I’d really like to do at least 3 of the 9 events.  I’m looking at the Northern Kettles Endurance Challenge (Greenbush) on May 11, Stump Farm on July 6, and the Northern Kettles Fall Epic (New Fane) on Sep. 28.  Then, as the road and mountain biking seasons wind down, the cyclocross season hits its stride.  In that arena where power-to-weight is so critical, I’ll definitely want to be as light as I can be.
Posted by Dave Hanrahan at 5:05 PM