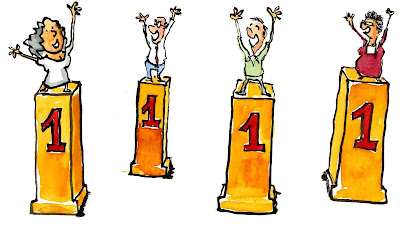 In Wisconsin we have two statewide mountain bike racing series: WORS and WEMS. USA Cycling recognizes WORS as the state championship series. WEMS operates independently. WORS attracts hundreds of participants who compete for awards in multiple classifications based on gender, age and ability. WEMS recognizes gender as a distinguishing attribute and allows riders to race as individuals or as members of a relay duo or team, but WEMS does not classify riders by age or ability.

Sometimes it seems like WORS goes too far with its distribution of awards, creating classifications so precise that they contain just a handful of racers. There are several categories in which simply completing the race puts you on the podium.

In WEMS races, women, duos and teams all have excellent chances of winning just by finishing. But in the men’s solo categories, you’re merely pack fodder unless you are a Pro or Cat 1 (or equivalent). You go head-to-head against even the best racers over the same terrain. Most WORS races have course configurations that get longer and more challenging as the day’s schedule progresses from beginners to experts. In a WEMS race you get to see how you really measure up, and I think many racers enjoy the purity of that competition.

But some people now are advocating a change that would make WEMS more like WORS: categorization by ability. On the surface it sounds like an OK idea, creating more opportunities to recognize the racers’ achievements. And WEMS is listening, because the change could lead to greater participation. But how would the series administer that change? I think most promoters and racers want WEMS to stay free of USA Cycling oversight. If the races remain unsanctioned and many of the riders remain unlicensed, then it falls to WEMS to develop a system of classification that includes criteria for upgrades. I wouldn’t want that headache. Everything from registration to individual race scoring to series standings becomes exponentially more complex.

This is an occasion on which it’s best to leave well enough alone. Categorization by ability could be the first step down a slippery path to categorization by age and other attributes, and pretty soon WEMS is handing out trophies to everybody who shows up. And if most racers regard the WEMS calendar as a collection of individual events instead of a season-long points competition, what’s the harm? WEMS gives unlicensed racers a chance to compete, it visits several trail systems that WORS could not effectively use, and it offers course distance challenges far in excess of the 25-30 miles that WORS asks of its elite. WEMS is a distinct series and it should remain so, without apologies.
Posted by Dave Hanrahan at 11:30 AM