Because I will be away from home next Saturday, I will miss the webcast of the US Cup mountain bike race in Fontana CA. That will be the third race of the four-race series, with the finale scheduled for June 28 in Colorado Springs. I watched the first two races as they happened. The initial webcast was a little rough. I think there were just two cameras, so glimpses of the riders were few and far between. Today’s webcast was better: more cameras on the ground, plus occasional shots from a helicopter. In each case, play-by-play commentator Colt McElwaine deserves a lot of credit for keeping the webcast interesting during those long periods when the racers were out of sight.

As I watched the Mellow Johnny’s Classic back on March 1, I wondered whether live video coverage could affect how courses are designed. It’s an expensive proposition to outfit a long mountain bike course with cameras, so maybe it would make sense to create shorter courses to give viewers more opportunities to see the riders. That was the case today at the Bonelli Park race: laps of just 12-15 minutes, with lots of open areas that could be covered by a handful of cameras pivoting from fixed locations. It reminded me of the purpose-built mountain bike course for the 2012 London Olympics: 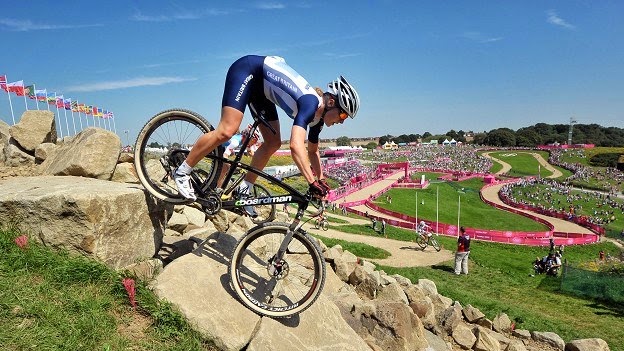 Is that the future? If the sport wants to attract spectators—both at the venues and for the broadcasts—then the answer might be yes. To monetize the fanbase, a race promoter simply cannot allow the racers to disappear into the woods for 90 minutes and then reappear for a 30-second dash to the finish line. Could you live with multiple short laps of a course that spends at least as much time in the open as in the woods? Is it still “real” mountain biking if some of the technical features are man-made, as they were at the London Olympics and today at Bonelli Park?

I don’t know. Cross country mountain biking is an endurance sport and it is just really damned hard to watch. You don’t want it to be transformed into a cyclocross or BMX race; those disciplines already exist. But if you want it to be financially viable at the professional level, then things have to change and the US Cup might become the engine of that change.
Posted by Dave Hanrahan at 10:30 PM