Earlier this year I mentioned the potential for short track cross country (STXC) mountain bike racing at Pleasant Valley Park. At roughly 1.2 miles, my original concept for the course is probably too long, but I still haven’t had a chance to test it because those trails are so frequently closed by rain. What if there were another option? Why not New Fane? Why not this? 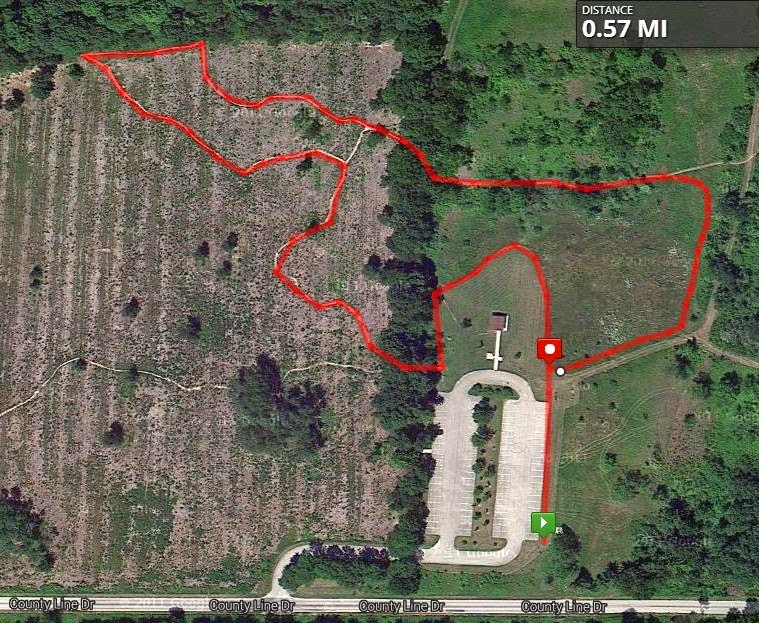 Imagine a starting chute on the east side of the parking lot. The race would begin with a flat-out sprint over cut grass to create separation before the clockwise loop through the prairie. Returning through the treeline, racers would gain a little elevation before the right-hand turn that takes them back to start another lap.

In the past, the DNR allowed the WEMS race to use a short section of the hiking trail. If such permission could be secured for STXC, then no new trail would be needed. Otherwise, as shown in the picture, temporary turf trails could be cut into the grass parallel to the hiking trails. All along the course there is vegetation that could be cut back to create more passing lanes, but doing so wouldn’t change the character of New Fane. Overall the trail system would remain a wooded, singletrack haven.

WORS attracted a big crowd of STXC racers in Portage back on July 11, a Friday. The WORS Cup is the only sanctioned STXC race in Wisconsin this year, and I think there’s an under-served market for this style of racing. But just like Pleasant Valley, New Fane has limited parking and couldn’t handle a WORS crowd. STXC could be something that the local racers just keep for themselves.

But there’s a subset of the WORS crowd that might really benefit from STXC at a smaller venue: high school kids. The WORS Cup featured 34 juniors on the short track. I assume that most of them travel with their teams or their families, reducing the demand for parking. Is New Fane big enough for a high school race? We’ll know more when we see the participation figures from this year’s races.

Mountain bike racing is generally not a spectator-friendly sport. A full, 5-mile lap at New Fane would take most high schoolers around 30 minutes and for almost that entire time they would be deep in the woods, hidden from view. Virtually all mountain biking venues are like that. But STXC on a course of only about half a mile—a race that lasts, say, 20 minutes + 1 lap—would provide plenty of action for spectators watching from the area around the pavilion. And with races of such short duration, you could run separate heats by gender and ability. You could even run multiple shorter heats in which the top finishers advance to the finals.

What if New Fane were the only STXC date on the interscholastic calendar, starting in 2015? What if it were, in fact or in essence, the state championship? Look at the roster of teams registered for the 2014 season. That’s a lot of kids from Washington and Ozaukee Counties. Give them home field advantage! Grow a couple of state champions and see what that does for participation.

Bringing STXC to New Fane is a challenge for which Team Pedal Moraine is uniquely suited. Many team members already contribute to the development and maintenance of those trails, and we know most of the coaches in the new high school league. At the cost of additional volunteer hours, the benefit to the team is the visibility that comes from hosting such an event. We need to attract a new generation of racers to take the team into the future, and there may be no better way than to get involved at the high school level. A scholastic racer in the fall could be a TPM racer in the spring and summer, and then a valued teammate for decades after high school.
Posted by Dave Hanrahan at 9:00 AM