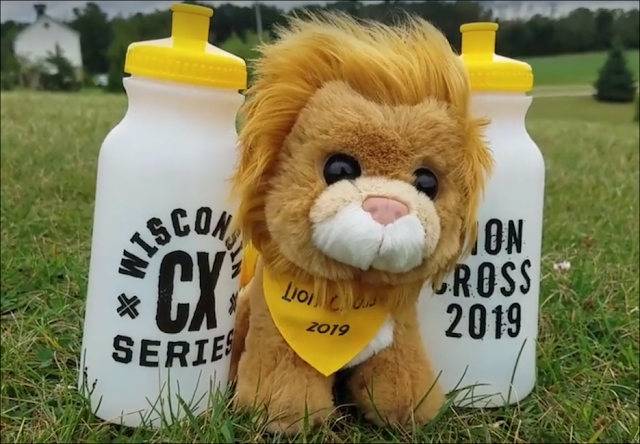 Making its second appearance on the WCA cyclocross calendar following a successful launch last season, today’s Lion Cross at Waterford Town Park in western Racine County was an exercise in humidity and, for me, humility.

Recent heavy rains left much of the park under water and forced the organizers to take the sand volleyball court out of the course. I didn’t mind its exclusion; on the final lap last year that feature cost me a position I had been fighting hard to win. We didn’t have rain during the race but it might have been welcome. With temperatures in the 70s and humidity in excess of 80 percent, the air was thick. On a course with no running, I didn’t hesitate to take a water bottle on my downtube. I had time for only a couple of sips, but they were comforting.

During the race I felt bad about my performance. I had a rough start, and when I lost the wheel of John Lichtenberg (Diablo Cycling) halfway through Lap 1 some of the fight went out of me. I needed a couple of laps to find it again. It helped that I was picking off singlespeed riders who had started a minute before my wave, but the biggest resurgence in my momentum came when I spotted age group foe Richard Prodans (unattached) just ahead. Prodans benefited from a better start than mine, but by Lap 4 he seemed to be out of gas. Pursuing and then dropping him gave me a small victory in the dying moments of an otherwise below average race.

I finished 13th out of 17 in the Cat 1/2/3 Masters 50+ race. John Lirette (Ben’s / Milwaukee Bicycle Co.) took the win, followed by Jarrod Kerkhoff (MSN Pro Coaching) and Lance Johnson (Velocause Centraal Cycling). Six of the 17 racers were from Illinois, but this was still the smallest field of the season. Some of the usual suspects were in Iowa this weekend for Jingle Cross. Incidentally, that's a pair of Cat 2s at the head of affairs. I was 10th out of the 14 Cat 3s.

Up next is the Trek Cup and the UCI Cyclocross World Cup races in Waterloo. I will be there on Sunday to watch the pros, then it’s back to racing for me on Saturday, Sep. 28, at Humboldt Park in Milwaukee.
Posted by Dave Hanrahan at 7:01 PM