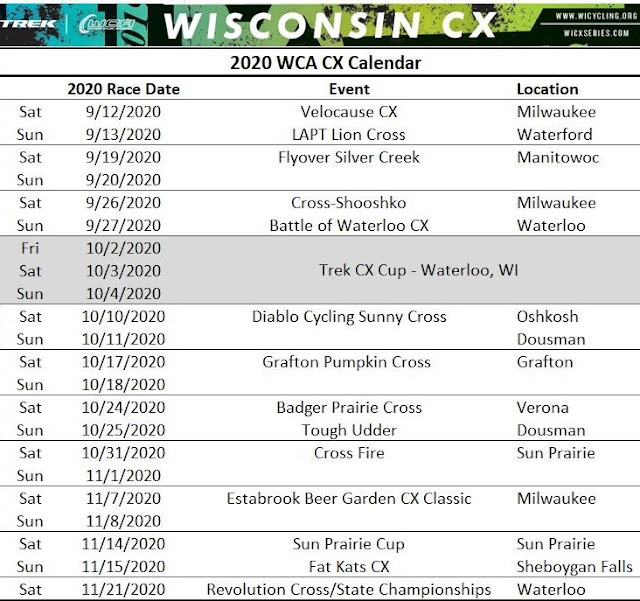 To the best of my recollection, the Wisconsin Cycling Association’s cyclocross schedule has never survived intact between its first public appearance and the state championships, so take this schedule as a good starting point and not as an unbreakable promise.

In years past we saw races get wiped out by poor preseason planning on the part of the organizers and by bad weather that led some government agency to rescind permission to use its property. Those possibilities still exist, but the biggest question is the COVID-19 pandemic.

Will our lives be anything like normal by mid-September? I have my doubts. If they are, then 2020 could be a great cyclocross season in this part of the world. But a lot will depend on whether the USA Cycling Cyclocross National Championships—December 8-13 in suburban Chicago—take place as scheduled. USA Cycling plans to give an updated statement on June 15. Postponement or cancellation are very real threats. If the national championships stay on the schedule, then having them so close to Wisconsin will add a dimension to the season that wouldn’t be there otherwise. A lot of Wisconsin racers will aspire to compete at nationals, and Illinois racers will flock to our Saturday events in search of points that would be harder to get on a Sunday in the Chicago Cyclocross Cup.

And then there’s the World Cup race at Trek in Waterloo on October 4. With so much uncertainty about not just public health but also the global economy, will the Europeans even bother to show up for the only 2020-2021 World Cup race outside of Europe? Will their teams take on the expense of sending them here? There’s little incentive: with an expanded World Cup schedule, the points lost by skipping Waterloo won’t amount to anything in the final standings. I think the Europeans will let the North Americans have their day, and then the North Americans will have to make some hard decisions about their own campaigns in Europe.

So, be excited about the possibilities, but be flexible with your plans. Cross is coming … probably.
Posted by Dave Hanrahan at 12:00 AM