Act Now To Save The Bike Route Plan 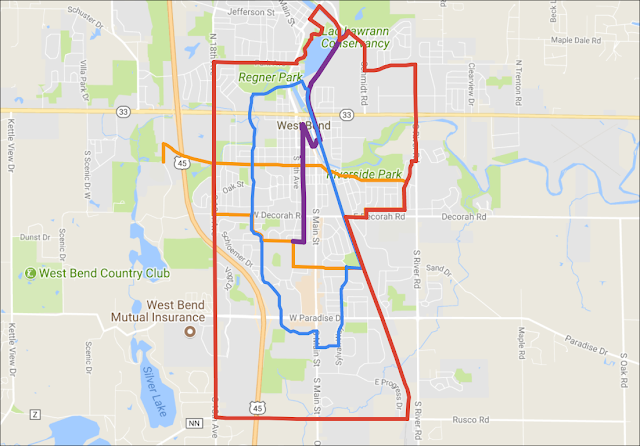 We have reached a critical moment in the development of cycling infrastructure in West Bend. If you care about this issue, then you need to act now.
The Common Council will reconsider implementing part of Bike Friendly West Bend’s route plan when it meets at City Hall next Monday, December 21, at 6:30 p.m. The map above shows the entire route plan. Three years ago today, that plan failed to find enough support. But the composition of the Common Council is very different now, and up for consideration on Monday is only the orange loop—BFWB’s top priority—not the full plan.
As you can see on the map above, the orange loop is the primary east-west route in the BFWB plan. For short distances it runs concurrently with the blue loop (the primary north-south route) and the red loop (a perimeter route that someday may link West Bend to new intercity routes envisioned by the Washington County master bike plan). The orange loop would connect schools, parks, and residential neighborhoods. Here’s an isolated view:
When the full BFWB plan failed at City Hall in 2017, it failed on financial grounds. At that time, the overall cost to implement the plan was a little more than $100,000. This time the price tag is only about $25,000. BFWB has secured private funding for the materials and is asking for city employees to do the installation. Here’s the cost breakdown from the city: 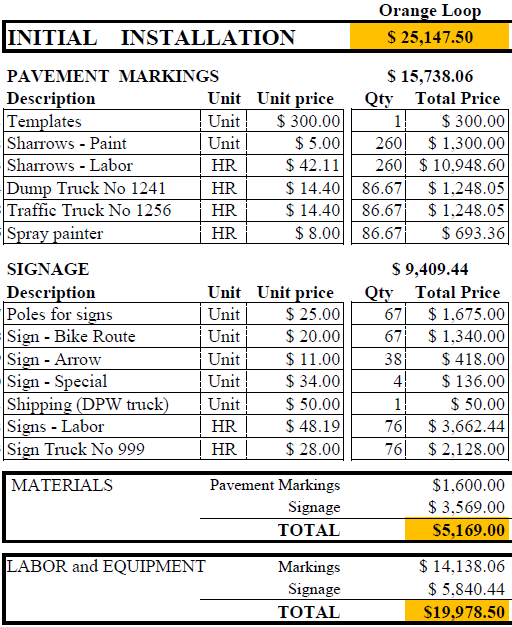 The popularity of the Eisenbahn State Trail is proof that the people of West Bend want bike-friendly infrastructure. And with bicycle sales enjoying explosive growth during the COVID-19 pandemic, it’s easy to imagine that the demand for bicycle accommodations will increase. The BFWB plan is a very carefully measured approach, one that was always expected to take several years to implement. The full plan was too much for the Common Council to swallow three years ago, but this could be the right time to adopt the orange loop as a standalone plan. Its implementation in 2021 would provide a proving ground to strengthen the case for a larger network.
So, let your alderperson know that you support the plan. This page on the city’s website will allow you to identify your representative. If you live in District 6, whose alderman Steve Hoogester died unexpectedly last month, then please express your support for the plan to Mayor Chris Jenkins. Act now! BFWB learned of the inclusion of this agenda item just three days ago, so there was little time to rally the troops. Your support could make the difference.
Posted by Dave Hanrahan at 12:00 AM