If you enjoy bicycle racing on TV, then you probably noticed the recent announcement by NBC that it is restructuring its sports networks. That includes NBC Sports Gold, a standalone streaming package to which I have subscribed since 2017. At that time it was a good deal: $39.99 for a year of top events, the centerpiece of which was Tour de France coverage far in excess of what I could get elsewhere. We’re talking wire-to-wire coverage of most stages … even the boring neutralized roll-outs. But each year the package has gotten more expensive: 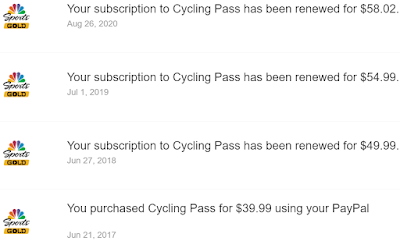 That’s a 45 percent price increase. Did your income go up 45 percent during the same period? Mine didn’t. And recently the package has gotten less comprehensive. Where are the cyclocross races I used to enjoy? They’re now on FloBikes, whose cheapest option is $12.50 per month. Screw that. I’m not going to pay NBC and FloBikes and GCN and whoever comes along next. I didn’t get rid of cable years ago so that I could replace it with a hodgepodge of different subscriptions. My NBC Sports Gold subscription runs through the end of May, so if the pandemic doesn’t wipe them out, these are the last races I will pay to see:
It sounds like NBC Sports Gold is going to hold on through the end of 2021, so I’m walking away from a lot of Tour de France coverage … probably. Again, who knows what the pandemic is going to do to the schedule? I’m not willing to gamble good money on it.
Posted by Dave Hanrahan at 1:30 PM