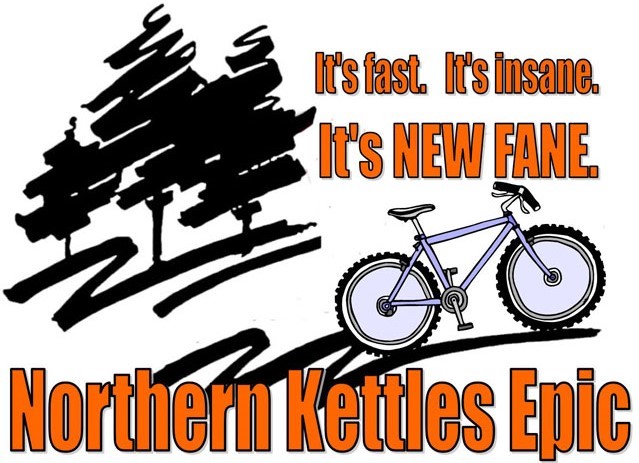 On Saturday afternoon I paired up with Steve Cummins of Team Pedal Moraine in the 5-hour duo competition of the Northern Kettles Fall Epic at New Fane, race number 8 of the Wisconsin Endurance Mountain Bike Series.  Steve and I took 2nd place … out of two teams.  We completed the same number of laps (11) as the husband and wife team of Gary & Jen Barden, but we couldn’t match their speed.  It took us 4:50:46, but it took them just 4:43:38.  The Bardens also won the middle-distance duo category at the RASTA Rock ’n Root on Aug. 4 in Rhinelander and have ridden well in other WEMS races this year.  They were tough; no holes in their game.

Steve and I approached the race as a training exercise.  We have no series ambitions in WEMS but each of us still has something to play for in WORS, and Saturday was a good tune-up for the Bear Paw Rock & Roll race at White Lake on Sep. 30.  At New Fane, Steve had a faster start but then things evened out:

It was my first experience racing as part of a duo.  There’s a different mindset.  You know how long it’s going to take your teammate to complete a lap, so you have time to eat, drink, make equipment or wardrobe adjustments, use the bathroom, etc.  You recover from the effort of your lap, but you also cool off.  Restarting after a break doesn’t feel exactly like your first lap, but it’s close.  There certainly was a rhythm to the race and a relaxed vibe that was altogether different from the Go-Go-Go of WORS.  I like both formats.

Turnout for all divisions was small, but everyone enjoyed the racing as WEMS returned to New Fane for the first time since 2008.  Credit to Bill & Brittany Nigh of Team Pedal Moraine for hosting the event, and to the volunteers who assisted them.  Hopefully we’ll see New Fane on the schedule again next year.  Saturday’s attendance was low in part because of other big cycling events across the state.  On a different weekend in 2013, the New Fane race might really take off.
Posted by Dave Hanrahan at 2:00 PM