We’re From The Government And We’re Here To Help

While riding through Quaas Creek Park on Monday I noticed some new signs and, well, let’s just say that my first reaction wasn’t positive. 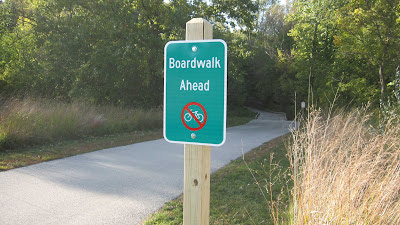 The sign above seems to indicate that bikes are forbidden, but that’s not exactly the case.  Travel just a few feet down the trail and you’ll reach a second sign that explains the new rule: 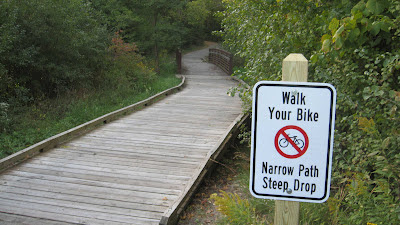 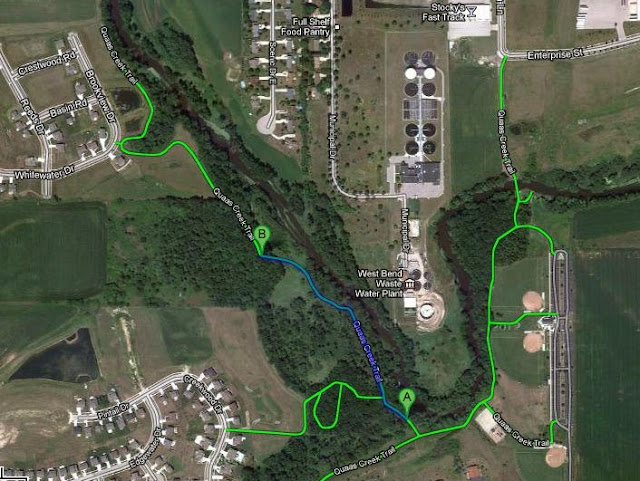 What problem are we trying to solve with these signs?  Was there a recent bike-versus-pedestrian accident?  I approached the City of West Bend and got this response:

“These signs were installed under direction of the Department of Transportation (DOT), as the DOT partially funded the Quaas Creek riverwalk’s construction through a grant.  The boardwalk sections of the riverwalk do not meet DOT standards for trail width to accommodate multi-users (bicyclists and pedestrians), so instead of reconstructing the entire boardwalk, it was determined that the City would install signs.  The type and location of the signs was approved by the DOT prior to the installation.  This was necessary for the City to receive reimbursements on grants for the newest part of the project over the Milwaukee River, and also to be eligible for funding grants in the future.”

I’m grateful for the explanation.  Now that I know a federal government agency is the instigator, it makes sense that it doesn’t make sense.  If the trail isn’t wide enough to accommodate a pedestrian and a bicyclist, then isn’t it even less accommodating when that bicyclist is walking next to his/her bike?  I guess the logic is that the bicyclist-turned-pedestrian is now moving at the same speed as the pedestrian, so an acceptably small amount of damage will result when they brush against each other as they pass.  You might ride through Quaas Creek Park a hundred times before you see another soul on those trails.  These new signs are the solution to a problem that doesn’t exist.  Of course, the DOT’s standards are meant to apply universally and not just in our quiet corner of the world.

Still, isn’t it odd that a motor vehicle—one which may be traveling at a very high rate of speed—must give a cyclist just 3 feet of clearance, but a cyclist traveling at 10-15 mph on a multi-use trail cannot be trusted to pass a pedestrian safely?

While I had the attention of the City of West Bend, I also inquired about the gravel trail that extends from Quaas Creek Park north to Stockhausen Lane.  Many cyclists have found the gravel to be unacceptably coarse and hoped the section would be paved with asphalt.  That’s not in the city’s plans, as the gravel trail crosses private property for which the city has an easement.
Posted by Dave Hanrahan at 9:09 AM