My favorite venue in the Tour of America’s Dairyland is Downer Avenue in Milwaukee. That’s my old neighborhood: I used to live at the corner of Bradford and Prospect. ToAD didn’t exist at that time. Its predecessor—the International Cycling Classic, or “Superweek”—did, but I wasn’t into cycling when I lived on the East Side.

Today I was into the pro women’s race, won in beautiful solo style by the beautiful Alison Tetrick:

I also was into the bike shop owners’ tricycle beer keg pull, won with dashing style by the dashing Bill Koehler of Belgianwerkx …

and completed in good time by the good-time Russell Jobs of DreamBikes:

Ricardo Escuela won the pro men’s race to tighten his grip on the leader’s jersey with just one race remaining. I plan to be in Wauwatosa on Sunday to see the finale.

Former Team Pedal Moraine road racer Jadon Jaeger, now of Belgianwerkx, survived a bizarre incident in the men’s Cat 4/5 race and appears to have a lock on the leader’s jersey in his classification. Jaeger’s race was neutralized when an advertising scaffold crashed onto the course. I wasn’t there to see it, but here’s a picture from Jaeger’s page on Facebook: 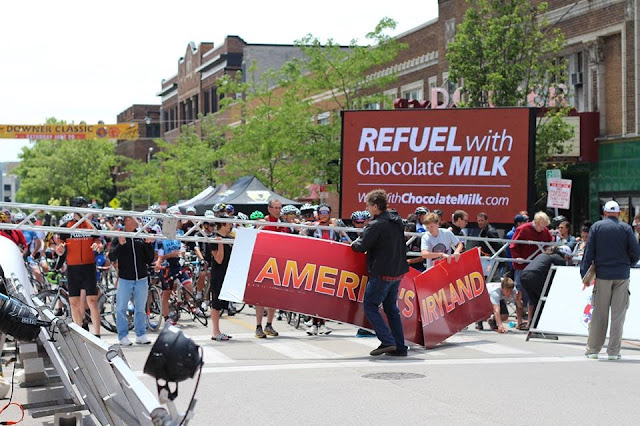 Sounds like there weren’t any serious injuries to racers or to people in the crowd, and after lifting the scaffold from the course the race was allowed to resume. The incident was oddly similar to what happened at the Tour de France today. Just when you think you’ve seen it all, huh?
Posted by Dave Hanrahan at 11:15 PM