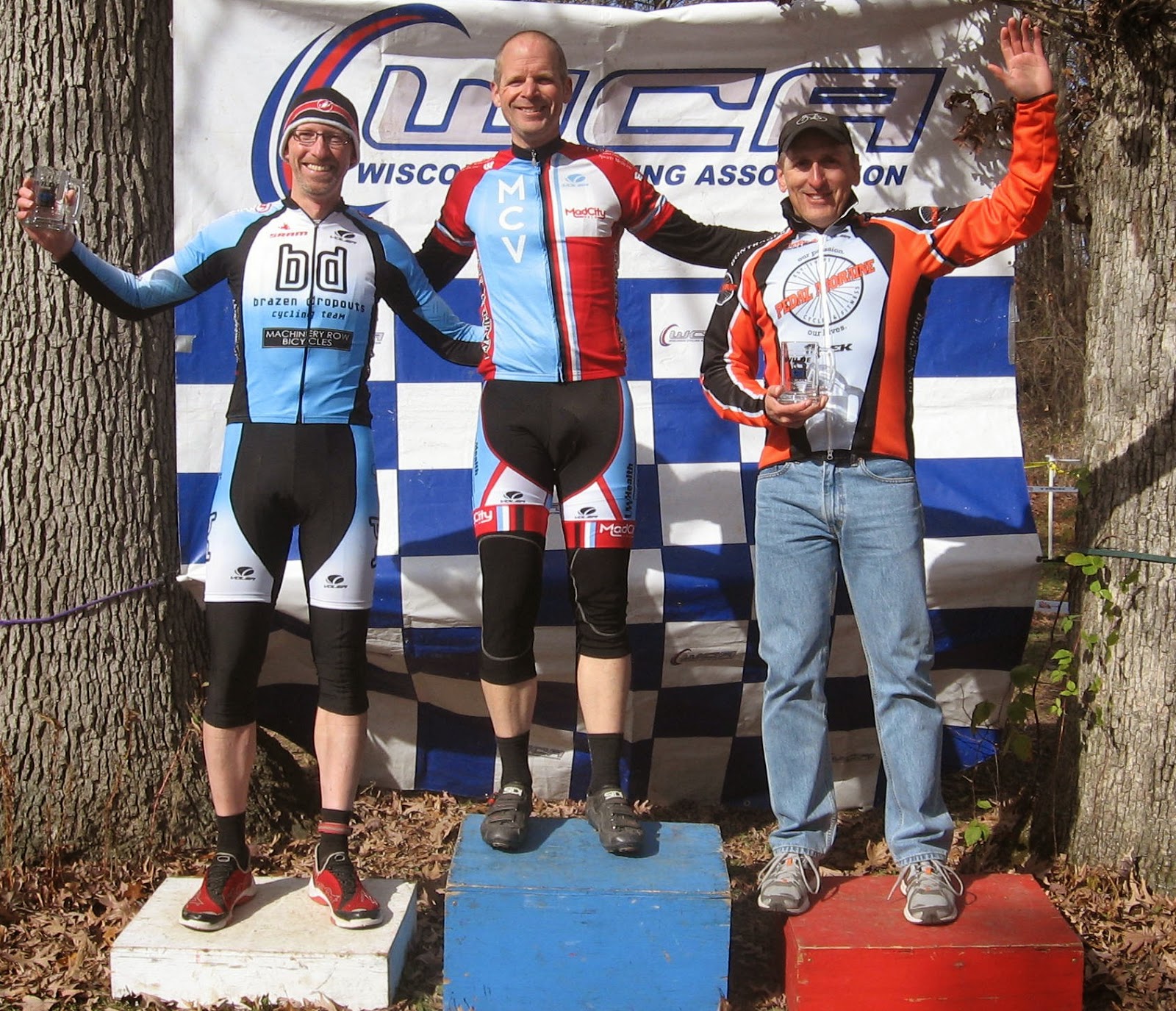 At 9 a.m. on Saturday I was in my home office watching streaming coverage of Koppenbergcross from Belgium. I had decided on Friday evening that I would not compete in my own cyclocross race at Estabrook Park in Milwaukee. The weather forecast was unfavorable, and it proved correct: wind chill in the 20s. That’s just too cold for me. Maybe I will get there someday—in my evolution as a cyclist I have dramatically expanded the temperature range in which I operate—but I’m not there yet.

When I awoke today the temperature was just 27 degrees but the hour-by-hour forecast promised sunny skies and a reasonably quick warmup, so I headed west for the Battle of Waterloo. I had previewed Firemen’s Park in September when I was in Waterloo to watch the Trek CXC Cup, but I couldn’t be sure where the course would go. What I found today was a course that suited my abilities well and contributed to my best-ever finish: 2nd place out of 13 in the Cat 4 Masters 45+ race. After four 4th-place finishes and three 3rd-place finishes this year, it was great to take an extra step up in the standings.

Early in the race I flirted with the idea of reaching the podium’s top step. I got a very good start and led the race for half a lap before Mark Badger (Brazen Dropouts) and Larry Gundlach (MadCity Racing) dropped me into 3rd place. The three of us stayed close together and started to open a serious gap on our pursuers. If Lap 1 was a manic sprint to break free from the pack, then Lap 2 was a time for the leaders to look for each other’s strengths and weaknesses. There seemed to be no place on the course where Gundlach was clearly superior or inferior to me, but Badger wasn’t climbing as well as I was. It was Cross-Shooshko all over again, but today I had to lose him before the last lap or Gundlach would simply ride away. On Lap 3 I dropped Badger and accelerated up to the leader. Gundlach and I ascended the big run-up together but I couldn’t overtake him. As the final lap began I was a couple of seconds behind, and I just never found them.

Today’s race was a return to form after a couple of disappointing results last weekend. I felt good physically, I handled the bike well on a course with several technical challenges, and my race tactics were sound. But I still have never raced later than Nov. 5 and the forecast for the next event on the WCA schedule—Cam-Rock Cross on Nov. 8—is far from ideal. Maybe I can make cold weather acclimation part of my training plan in the week ahead.
Posted by Dave Hanrahan at 9:00 PM