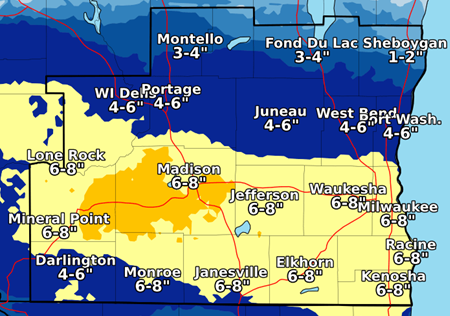 How lucky were we yesterday for the 10th Annual Cheesehead Roubaix? The map above shows the Saturday/Sunday forecast issued by the National Weather Service last Friday. I was seriously thinking about rescheduling the ride for May 5. Almost any accumulation of snow would have rendered the unpaved roads effectively impassable by bike, as they would not have been plowed. And what is Cheesehead Roubaix without those unpaved roads?

But as the hours wore on, the storm’s track kept shifting south. In the end, northern Washington and Ozaukee saw only flurries. About 150 riders left Fireman’s Park in Newburg under a brilliant sun and rode in relative comfort: mid-40s and only light winds. Yeah, it was a below-normal turnout on a day with below-normal temperatures, but I was grateful for every rider and every degree. The day exceeded my expectations.

Newburg Fire Department was delighted too. We were a small but generous group, raising more than $1,200 to aid the department in its recovery from damaging floods at Fireman’s Park earlier this year.

My personal performance at Cheesehead Roubaix wasn’t statistically impressive but I was pleased with it. I completed the 63-mile route in 3:52:28, a 16.3 mph average. I rode alone for almost the entire time and would have benefited from a cohesive group. I drifted in and out of a couple groups, but nothing worked for long. Oh, well. I’m most pleased with the way I rode the unpaved sectors—Lovers Lane in particular—where I drew a couple of positive comments from riders who didn’t expect me to fare so well on a standard road bike with 700x25 tires.

Usually I have about 1,000 miles in my legs by the end of April. This year I’m behind schedule: 701 at the end of Cheesehead Roubaix, and I won’t add to that total today or tomorrow. But the weather for next weekend looks good, and that will draw me out … if the forecast proves accurate. I’ve been misled before.
Posted by Dave Hanrahan at 11:00 AM