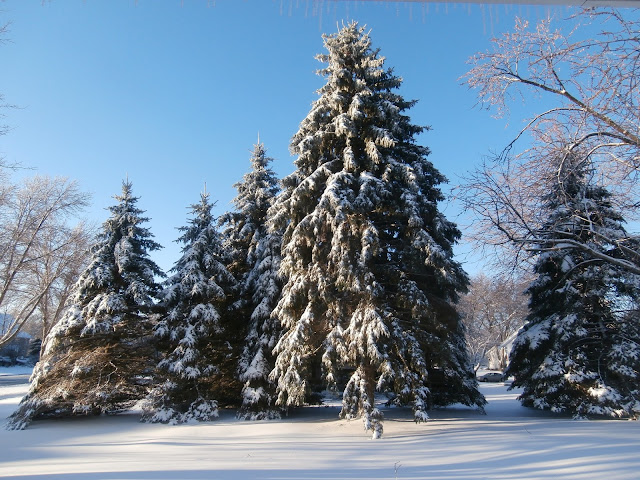 Here’s a shot of some trees in my back yard when the temperature was just 18° and there was fresh snow on ground. A Christmas memory? No, I took this picture today at 7:30 a.m. Forget about riding on the Eisenbahn State Trail for the next few days, and add another week before there’s any chance of the mountain bike trails opening. At least the roads should be available again by tomorrow … probably.
Posted by Dave Hanrahan at 8:00 AM 2 comments:

You Say You Want A Revolution?


Here’s something I never thought I would see: dissent and disaffection within the highest ranks of bicycle advocacy. It seems the Washington DC-based lobbyist group known as the League of American Bicyclists is now too mainstream for Dave Cieslewicz, Executive Director of the Wisconsin Bike Fed. The advocacy process is too staid, its results too incremental. Cieslewicz voiced his frustration earlier this week and, for what my approval is worth, I applaud him for showing such courage. That’s not to say I concur on every point; I’m just glad to see someone within the advocacy community who is willing to break the tacit agreement not to find fault with another’s work.

I’m going to repeat something I said before: the first priority of the League of American Bicyclists is its own perpetuation. Its business is not better bicycling, but bicycle advocacy itself. As long as money is being spent and bicycle infrastructure is being built, then the League is happy in its work. Whether its efforts actually lead to more bicycling is completely incidental.

I want you to imagine a world in which all of the League’s dreams are realized. Put protected bike lanes on every inch of American roads and bike share stations on every street corner. Welcome bikes aboard every bus, train and ferry to create that multi-modal commute that so many of us are dying to make. Strike down every law that requires helmet use or bike licensing or other “barriers” to entry. What then?

Then comes the farcical, because the practical and the fanciful still will have failed to deliver a significant bump in ridership. Then the problem is that bicycling is still too hard and too slow. It has become safe enough, but who wants to ride in bad weather or up hills? What we need are climate-controlled tubes, a Habitrail for our electric motor-assisted bikes. Why, it would be just like an above-ground subway, but we’ll be getting exercise! And why is riding a bicycle such a white male-dominated activity? What we need are incentives to attract more women. Wait … not just women, but women of color. No, wait … not just women of color, but economically disadvantaged women of color. No, scratch that: physically-challenged military veterans of Inuit descent. For the love of God, how can we get more physically-challenged military veterans of Inuit descent to ride bikes?

Obviously, I’m having a little fun but the point is that the advocacy community will never be satisfied. Why should it be? It’s playing this game with somebody else’s money. None of its initiatives actually have to work, which is why it’s so hard to find reliable statistics that link infrastructure and legislation to changes in ridership. Don’t talk to me about 300% increases when your town started with 1 bike commuter and spent millions to attract 3 more. And how’s that bike share network treating you now that the private company charged with its administration has gone bankrupt and your city is operating it at a loss with tax revenue? The advocacy community will tell you that all public transit operates at a loss, therefore bicycling should have the same right to be a drag on your resources.

You say you want a revolution? Let me tell you about one that we had more than 200 years ago. It was organized and prosecuted by the wealthiest men in the country, who at the end of the Declaration of Independence said, “we mutually pledge to each other our Lives, our Fortunes and our sacred Honor.” That’s what they risked. What does the bike advocacy community risk? Not its fortunes, but yours.

A real revolution in bike advocacy would focus on increasing ridership directly. Instead of infecting the public with fear and then curing it with infrastructure, why not emphasize that bicycling is already very safe, very affordable, and, for many people, a legitimate alternative to other forms of transportation? We know that the roads get safer as more people ride. We can infer that as more people ride, more people will demand infrastructure improvements where they are truly needed. Let patterns of use dictate construction parameters, rather than undertaking construction with nothing more than an assumption of need. Work on legislation that preserves access to public streets and protects cyclists but also expects cyclists to conduct themselves safely and lawfully. Educate motorists instead of demonizing them, but when their intentional or negligent actions harm cyclists, then demand justice from law enforcement agencies, district attorneys and judges and make the public aware of the results so that it, in turn, may judge on election day. In such ways does an advocacy group represent its constituents and not merely its own interests.

We all want to change the world, and often the best first step is to change ourselves. The League of American Bicyclists is the conventional face of advocacy. It’s not likely to change. But a more militant stance from the Wisconsin Bike Fed isn’t the solution; solving real problems for real people is. Whether those solutions impress the rest of the advocacy community shouldn’t matter.
Posted by Dave Hanrahan at 8:00 AM 1 comment: 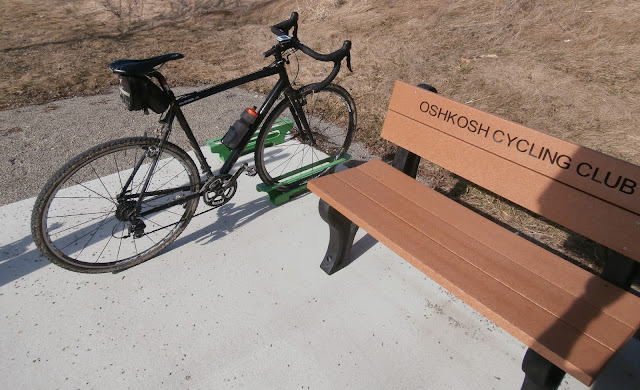 This morning I traveled to Oshkosh for the Fox Valley Bike Sale. It was a well-run, well-attended event at the Sunnyview Expo Center, site of one of my favorite cyclocross races in 2015. I was in the market for tires—very specific tires—but I left the sale empty-handed. Carpool partner Jeff Wren did OK though, finding several items he needed.

It was a warm and sunny afternoon, so we left the bike sale and headed 3 miles down the street to the Wiouwash State Trail. Neither Jeff nor I had ever ridden it, but we had our cyclocross bikes with us and our plan was to travel north to the trail’s end at Hortonville. That would have been 36 miles round-trip. Unfortunately, we soon realized that the trail was still soft and wet in many places, and very tough going. My solo ride on the Eisenbahn earlier this week gave me hope that the unpaved rec trails in the area were all firm enough to ride, but the Wiouwash was a mess. Frustrated, we abandoned the north-south Wiouwash as soon as we reached the east-west Friendship Trail. But the latter also was soft, so in turn we abandoned it in favor of local roads. With not too much further trouble we felt our way back to the trailhead from which we had started. Our 27 miles were slow and, at times, sloppy. Still, it was better than a day on the turbo trainer!

The Wiouwash deserves another look. I will wait until I know it’s dry and I will begin in the heart of Oshkosh to see the trail in its entirety. Today’s ride missed the section along Lake Butte des Morts, which must be its most scenic feature.
Posted by Dave Hanrahan at 6:00 PM No comments:

Edge, But Not Cutting Edge 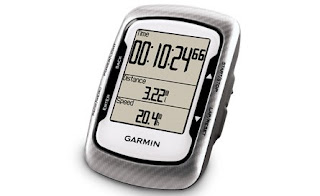 I just know that this is going to be a great week. Paris-Nice and Tirreno-Adriatico will give me something to watch over breakfast, temperatures in the 50s and maybe even the 60s will motivate me to rack up some miles on my bike in the afternoons, and Daylight Saving Time will return in the middle of the night on March 13, adding a usable hour to the end of the day. Was it just two nights ago that I drove to work on snow-covered roads? Spring gets turned on tomorrow as if someone were throwing a switch, and hopefully we will see no more of winter.

I’m ready. In fact, I’m armed with better technology as the 2016 cycling season begins in earnest. On Friday, before the snow came, I did my first ride with my new GPS device. My old Garmin Edge 200 died near the end of a ride last weekend. I tried all sorts of things to get it to respond/reset, but nothing worked. Whatever went wrong, I think the battery was OK. But the device is 3 years old and has seen a lot of use, so I’m not horribly disappointed if it has reached the end of the road. The 200 is a very basic unit anyway and lately I have been thinking about adding some new dimensions to my training. I’m very interested in Zwift, for example, and it demands things like power and cadence as input. The 200 can’t produce such numbers.

I found a good deal on a new-old-stock Garmin Edge 500. If you’re familiar with the Garmin line, then you know the 500 is far from the latest or greatest device. But it is a big step up from what I had. I would need add-on devices to measure power, cadence, etc., but at least I have those options now. Winter 2015-2016, assuming I can speak of it in the past tense, was a pretty easy one. Next winter might be worse, and if I’m confined indoors for too long I may turn to Zwift for relief. In the meantime I will be happy just to have a couple of additional features and (I hope) more accurate elevation data. The 200 always under-reported my climbing totals and I expect the 500 to do a better job.

I used a stopwatch and MapMyRide to figure out my time, distance and speed for a couple of rides that I did between the death of the 200 and the arrival of the 500. I feel confident in the accuracy of those numbers but I wouldn’t want to resort to that method every day!
Posted by Dave Hanrahan at 5:30 PM 2 comments:

A Mileage Record For February

Last month was my all-time best February: 205 miles. If you live in a state with warmer weather—i.e., all of them except Michigan, Minnesota and North Dakota—then 205 miles probably doesn’t sound like a lot. But in Wisconsin it is. And I didn’t even take advantage of Leap Day, as I didn’t feel like battling 20+ mph winds.

In my early years as a cyclist, only freakishly warm weather could tempt me outside in February. Now I try to ride whenever the temperature is at least 32° and the roads are dry. That’s not asking for much, but it’s hit-or-miss. Sometimes the warmest days of February are made unusable by high winds and rapidly melting snow that leaves the roads a wet, gritty mess. All of the miles I have ever ridden in February wouldn’t add up to an average total for one month in summer. Nonetheless, they are important miles because they are outside. They restore my spirits at a time of year when I otherwise would be confined indoors. Here’s the year-by-year breakdown:

December now has the distinction of my lowest monthly PR: 175 miles, set in 2012. In most seasons I have hit my mileage goal for the year before December arrives, and I’m usually done with my racing calendar. Weather conditions decline, the days are short, and it’s hard to get motivated. By contrast, February—though it’s usually miserable—is a time to work on new goals.
Posted by Dave Hanrahan at 2:00 AM No comments: