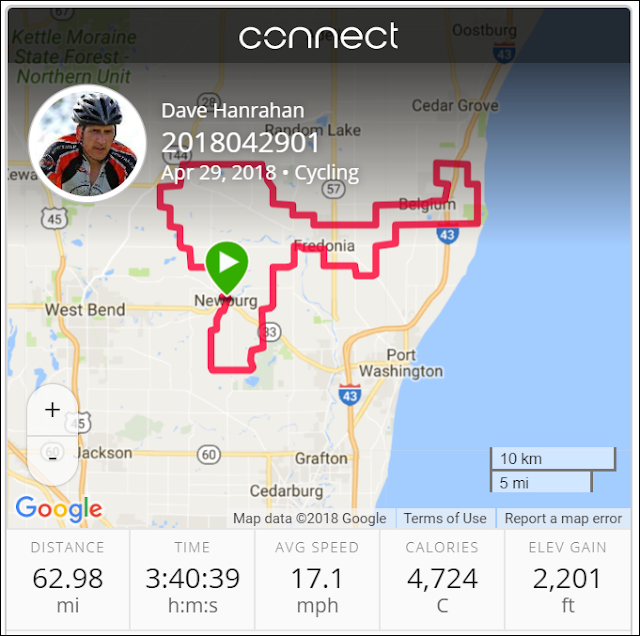 Yesterday in Newburg, the 9th Annual Cheesehead Roubaix could not have been more different than the 2017 edition. Last year’s weather was so awful that very few people showed up and almost nobody rode the whole route. And low attendance meant few contributions to our host, the all-volunteer Newburg Fire Department. We fixed all of that yesterday! With sunny skies, dry roads, and comparatively light winds, turnout was somewhere around 300 and NFD collected $2,129 in cash donations and concessions sales. Thanks to everyone who contributed!

I was thrilled to ride the route again after missing it last year. In 2017 I used my minivan to offer SAG service, knowing that a lot of riders would give up due to the harsh weather. Here’s how I have performed at Cheesehead Roubaix since 2013:

The route hasn’t changed since 2013, and that was my first year with a Garmin GPS device, so I can see with a fair amount of accuracy how my performance over the same 63 miles has varied from year to year. The differences in speed are all weather-related. I was fast in 2013 on a warm, dry, almost windless day; I was slow in 2014 on a cold, wet, windy day. This year I rode Lovers Lane cleanly while loose gravel forced many others to walk the last 100 meters—even guys with a lot more tire than my trusty 700x25 Continental Gatorskins. Overall, yesterday’s performance was statistically average. I still had a 17.8 mph average until about Mile 41 before fading. I haven’t ridden as many miles as I normally do by the end of April, and a lack of deep endurance was evident in the final miles on Sunday.

Cheesehead Roubaix 2018 was fun and successful, a return to form after a freakishly bad 2017 edition. As May begins, so do high-mileage weeks as I look to regain that deep endurance. But it won’t be long before I’m making plans for the 10th Annual Cheesehead Roubaix!
Posted by Dave Hanrahan at 6:16 PM No comments:

For a fleeting moment this afternoon we touched 60°, making this the warmest day so far in 2018. The last 60° day in West Bend was way back on December 4, a date whose average is only 35°! I celebrated today with a 37-mile ride in the company of friends. It wasn’t my longest ride—that distinction belongs to Friday’s 40 miles on my cyclocross bike. It wasn’t my hilliest ride—I did 1,440 feet of climbing on March 11 and only 1,385 today. But today’s ride was my fastest: 16.8 mph average on my road bike. That’s OK for this time of year, particularly considering the lack of saddle time lately. We weren’t out to kill this one.

So, today’s ride was a confidence builder for next Sunday’s Cheesehead Roubaix. And the weather looks good for the week ahead. With a few focused weekday rides, I should be feeling strong for my first metric century of the new season.
Posted by Dave Hanrahan at 6:30 PM No comments:

The snow that arrived on Sunday and Monday is still hanging around, and there’s more on the way. The weather forecast gets better rapidly after tonight, but Opening Day for local mountain bike trails has been pushed back by weeks. Long after the snow disappears from roads and yards, it will linger in the darkness of the woods. Here’s what the Department of Natural Resources said on Monday about the conditions in the Northern Kettle Moraine:

Things are even worse farther north. Yesterday the Wisconsin Endurance Mountain Bike Series (WEMS) announced that its season-opening race at Levis Mound will move from April 28 to May 26. I think the Wisconsin Off-Road Series opener—May 6 at Iola—is in jeopardy too, though WORS hasn’t said anything about it yet. Many factors go into why we hold races where we hold races when we hold races, and I know a lot of people who think this late blast of winter is an aberration. But it’s not that unusual, and again I question the wisdom of scheduling races in northern Wisconsin so early in the season. All things being equal, the chances of a postponement or cancellation are much higher there, year after year. And forget about the race courses for a moment—who has had open mountain bike trails on which to practice? I wouldn’t want my first mountain bike ride of the year to be a full-blast effort on unfamiliar trails, surrounded by other racers still rusty from a long off-season.

Road racers have been just as unlucky as mountain bikers so far. The first two weekends of the Wisconsin Cycling Association calendar were wiped out, but it looks like this weekend will be OK.

My racing season is still months away and for now I would be content with conditions that allow me to train outside consistently. I’m stuck on 575 miles, year-to-date, and I still haven’t ridden on more than 3 consecutive days. It’s no wonder that I’m 5 pounds heavier than I was on this date a year ago, and it’s going to take me a while to feel like myself again. I won’t meet my goal of 1,000 miles by the end of April, no matter how nice the weather gets.
Posted by Dave Hanrahan at 10:00 AM No comments: 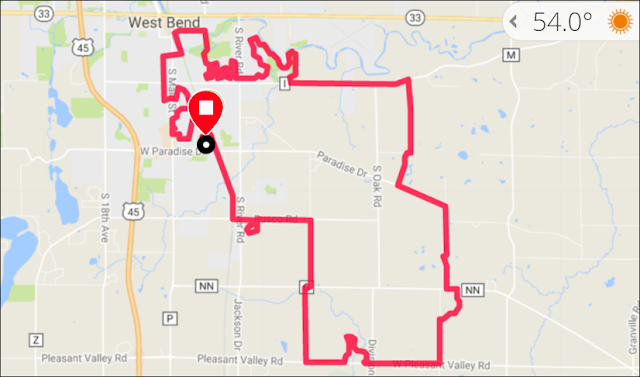 We’re almost halfway through April and today I did my first ride this month! Actually, it was my first ride since March 28. That’s disgraceful, but the weather has been truly awful. The average daytime high temperature between that last ride and today’s was 38°. We had rain. We had snow. We had high winds that on a few of those days dropped the “feels like” temperature into single digits. Basically, we had February weather for the last two weeks. I was demoralized. At least I kept up with my upper body strength training workouts in the home gym—those have been going well—but I couldn’t be bothered with the bike, not even indoors.

And if riding today became something of a moral imperative, then riding tomorrow will be even more urgent. The middle of this week is a tiny island of adequacy in a vast ocean of no F-ing way. We’re going to be drenched by rain on Friday and Saturday, then covered by snow on Sunday and Monday. Winter is a long way from done with us:

Enough already.
Posted by Dave Hanrahan at 5:00 PM No comments:

The Bicycle As Art

Way back in 2010, I mentioned the impending construction of a new building for the Museum of Wisconsin Art. Sitting right next to the Eisenbahn State Trail, MOWA would have some impact on bicycle traffic in West Bend, I assumed, but I didn’t imagine that it ever would host an exhibit to celebrate the bicycle as art.

Beginning next Saturday and continuing through August 5, MOWA will host “Joy Ride: Designing Trek,” and the exhibit isn’t the only bike-friendly event in the museum’s plans this year. MOWA explains things better than I can, and I hope that it won’t mind if I reprint the text from its website verbatim:

From its humble beginning in 1976, hand building steel bike frames in a Wisconsin barn, to becoming one of the dominant players in a multi-billion dollar global cycling market with its state-of-the-art headquarters based in Waterloo, Trek Bicycles offers more than just a vehicle of sport or transport, but an integral part of people’s lifestyles and a display of extraordinary artistry.

Joy Ride: Designing Trek highlights the company’s dedication to superior craftsmanship and innovation over the last 40 years. From an original steel 1976 road bike to many of the seventeen categories of bicycle produced today, Joy Ride traces the history and evolution of this global leader in bicycle design, acknowledging not just the diversity of people who ride, but the drive for performance and cutting-edge innovation.

A selection of bikes from some of Trek’s most famous professional riders will be on view: Rachel Atherton’s 2017 season downhill bike, Alberto Contador’s 2007 Champs-Elysées Tour de France bike, and Jens Voigt’s ‘hour record bicycle’ in which he recorded the longest distance traveled in a single hour from a dead start in 2014, to name a few. Other notable bicycles include polar adventurer and Cedarburg native Eric Larsen’s South Pole fat bike, and a 1995 Y33 mountain bike from the collection of late actor and avid cyclist Robin Williams. Trek’s playful side takes full reign in a psychedelic Grateful Dead-inspired mountain bike made for biking legend Gary Fisher and a collection of personal “art bikes” by Trek’s in-house designers that will be paired with works in the permanent collection galleries.