In America we don’t really have one-day, point-to-point road races like Omloop Het Nieuwsblad, which ushered in the 2018 European classics season earlier today. But we do have criteriums, and soon we’ll have a new way to watch them.

USA CRITS, our national criterium series, will introduce a new streaming video service on March 15. The service will feature all 11 events on this year’s USA CRITS calendar:

The service also will include some non-series races on the same weekends, plus on-demand replays and other content. Fans can purchase the whole season for $55 or individual events for $15 apiece. A portion of the subscriber fees will go to the teams that make up the series, giving them a new source of revenue.

It’s an interesting concept and I don’t know how fans will react. In past seasons, streaming coverage was free. But it wasn’t always easy to find. Each race had its own website where there might be a link to the video, or maybe it was available from VeloNews, or maybe on YouTube … it was all over the place. And the coverage was inconsistent: slick, professional production one weekend, high school A/V class project the next. If the new package delivers a uniformly good product without buffering, audio dropouts and other technical glitches, then USACRITS.tv will be off to a promising start.

But to give its fans an experience for which they will be willing to pay, USACRITS.tv will need to tell compelling season-long stories. Red Bull.tv did that so well during the 2017 World Cup mountain bike season—not just about Nino Schurter’s quest for perfection, but also on the women’s side as Yana Belomoina emerged as a new superstar. If USACRITS.tv is successful, then maybe it can be a model for the UCI. The cycling world’s governing body has never figured out how to create a coherent narrative for its WorldTour, an absurdly complicated concept that in 2017 recognized Greg Van Avermaet as its champion, while Tour de France winner Chris Froome placed 2nd and World Champion Peter Sagan was a distant 4th. The advantage for USA CRITS is the comparatively small scope of its mission. It’s not trying to weigh one-day classics against Grand Tours to determine the season’s best cyclist. Crits are crits, wherever they may be held. With the right storytelling on USACRITS.tv, America’s biggest road racing series could become more than just a collection of races with individual appeal but only a tenuous claim to nationwide interest.
Posted by Dave Hanrahan at 10:00 AM No comments: 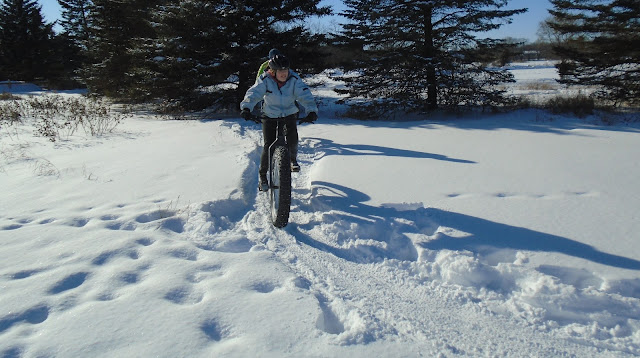 The focus was on fatbikes this weekend, even for me. No, I haven’t taken the plunge, and I don’t think I ever will. A fatbike can ride over snow—sometimes—but it doesn’t make the air temperature any warmer. The little interest I have in fatbikes is satisfied by the occasional demo day. Milwaukee’s Fyxation hosted one today at Pleasant Valley Nature Park & Trails in Ozaukee County, and I was there.

But I left without taking a ride. With the wind chill at 7°, witnessing crash after crash, and hearing nothing but complaints about the poor quality of the snow, I decided it wasn’t worth waiting for a demo bike in my size. The last fatbike demo I attended also was ruined by bad snow. On that occasion, the temperature was too warm. Today, the problem was the “freshness” of the snow we received last night, which apparently spoiled the “perfect” conditions that existed yesterday.

I was at Pleasant Valley yesterday, snowshoeing for the first time in 3 years! It has been a long time since we had a deep snow base, but the 12+ inches we received over the last 10 days has dramatically changed the landscape. Hitting Pleasant Valley on Saturday was a conscious choice to help prepare the trails for today’s event. Snowshoeing is a complementary activity: it packs the snow without leaving holes or ruts like hiking does. Of course, mechanized grooming works too:


But like I said 3 years ago, if the snow needs to be compacted to a smooth, road-like consistency, then why not just ride on the road? That’s what I plan to do later this week when the temperature gets back above freezing. The road starts at the end of my driveway; I don’t have to load the bike into my vehicle and drive to a trailhead. And the road gives me innumerably more route options. I’m barely a mountain biker, and I’m no kind of fatbiker.

Some people are, though. Like my teammate Matt Grady. Yesterday in Grand Rapids MI, Matt became the USA Cycling Fatbike National Champion for the men’s 23-29 age group. I think he’s the first national champion in Team Pedal Moraine’s history. We’ve had state champions in different disciplines and categories, but no national champions that I can recall. Well done, Matt!
Posted by Dave Hanrahan at 4:30 PM No comments:

At last weekend’s UCI Cyclocross World Championships, not everything went the way the experts predicted. Few people thought Wout van Aert, despite being the 2-time defending champion, would beat Mathieu van der Poel, this season’s most dominant rider, for the men’s elite title. And I’m sure nobody thought 16-year-old Harriet Harnden of Great Britain would take 4th Place in the U23 women’s race.

But there were few surprises otherwise. The sport continues to be dominated by Belgium and the Netherlands.

It’s not only cyclocross in which Belgium and the Netherlands excel. They produce some of the most successful road and track cyclists too. How do these two countries, whose total population is just 28.5 million, so consistently turn out great racers? I think part of the answer lies in population density. The combined land area of Belgium and the Netherlands is less than half the size of Wisconsin—you could drive across either country in less than 4 hours. That gives them roughly 1,000 people per square mile. Every race on home soil is a race against the best the country has to offer. Contrast that with Wisconsin, where Madison guys don’t go to Green Bay races, Milwaukee guys don’t go to Wausau races, and so on. Now expand that idea to the entire United States: 323.1 million people spread out over 3,794,083 square miles—just 85 people per square mile. To be part of a major series, or to accumulate UCI points, or (especially) to win a national championship, an American racer must spend a lot of time and money just traveling between race locations.

Finishing in 15th Place on Sunday, Stephen Hyde was the top American in the men’s elite race. He’s a New Englander who traveled almost 3,000 miles in January to win the USA Cycling National Championship in Reno. His 2017-2018 domestic itinerary included Wisconsin, Iowa, Ohio, Maryland, Kentucky, and Nevada, plus a few races closer to home. Fellow Massachusetts resident Jeremy Powers, a 4-time national champion, followed a similar schedule and said in an article published last week that his travel costs are a big problem. And he is perhaps the most highly sponsored of the lot! Imagine the hardship for racers with little or no sponsorship money.

Is it any wonder that the amateur categories at nationals are dominated by racers who live nearby? We don’t see an even distribution of riders from across the country; in both time and money, the travel burden is simply too large for most racers. And when last year’s champions don’t defend their titles because this year’s races are too far away, the quality of racing isn’t what it could be. That eventually comes back to bite us against fields of international riders who have been knocking the stuffing out of each other since they were kids.

I don’t have a solution. The United States will continue to have pockets of racing prowess across a landscape that remains largely empty. In cyclocross, this is really noticeable for the elite men: 14 of the 19 Stars & Stripes jerseys awarded since 2000 have gone to New Englanders. (Katie Compton’s dominance on the women’s side is a product of her unique gifts and not of a Colorado racing scene that is head-and-shoulders above all others.) Maybe the only answer is to support your local racing scene, making that pocket as big and as strong as it can be.
Posted by Dave Hanrahan at 3:30 PM No comments: