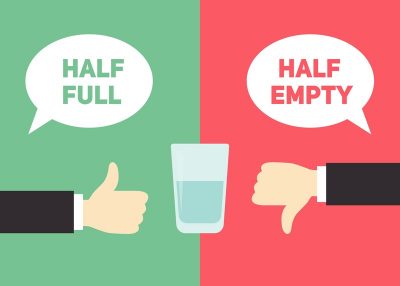 This month, two people suggested to me that my commitment to cycling is waning. I don’t suspect collusion; these people live 1,000 miles apart, have never met, and could not have coordinated their statements in any plausible scenario. And we’re all entitled to our opinions, but first let’s look at some facts.
With 6 months of 2021 behind us and 6 still ahead, I have ridden 1,945 miles. That’s not far behind the 2,096 miles I rode in the first half of 2020, and it’s ahead of my pace from 2019. Last year turned out to be a 5,214-mile season, my 5th best. I’m not shooting for 5,000 this year, but I should be comfortably above 4,000 by the end. And I’m finishing this month with a new personal record for miles in June: 880. That beats the 843 miles I rode last June and it is my second-highest total in any month ever, trailing only my 1,020-mile effort in July 2011. Good, right?
One of the comments about my commitment to cycling was very specific: I’m not doing really long rides anymore. My last 100-mile ride was on August 13, 2017, the 10th Anniversary edition of Race The Lake. But in truth, I have never done a lot of long rides. I have ridden 15 centuries all-time … out of 2,724 career rides. In 2015 when I rode an all-time best 6,236 miles, my average ride was only 29 miles. I did 215 rides that season. Consistency produced that big mileage total; I didn’t ride a bunch of 100 milers.
I think the other comment was substantially influenced by my lower profile on social media this year. On Facebook, Twitter, and even on this blog, I have been saying less about my own cycling activities. Why? I guess it’s because so far in 2021 my rides have been just rides. I haven’t been racing or riding with groups, and there’s a sameness to my training rides that I wouldn’t expect anyone to find interesting. This is Season 18 and much of the novelty is gone. What can I tell you about an out-and-back Eisenbahn State Trail ride or a quick loop around the Cedarburg covered bridge that you haven’t heard before?
A new month begins tomorrow. I don’t plan to make a run at a mileage record in July. But there are several new Garmin Connect goals for the new month and for the new quarter. I’ve been hitting all my targets on Garmin Connect. That’s good. It’s even kind of competitive. But it’s not racing. Perhaps my biggest challenge in July will be to find the motivation to train specifically for cyclocross. If I don’t race this fall, then I don’t know if I ever will again. And at that point I wouldn’t be able to deny that my commitment has waned.
Posted by Dave Hanrahan at 8:30 PM No comments:

Some Cycling Notes For June 2021

Today was my third straight day on the bike, so I guess I have another streak going. But it doesn’t compare to the 22 consecutive days on the bike from May 30 through June 20. I had hoped to ride every day this month … and then “summer” arrived. On Monday the 21st the air temperature reached only 64° in West Bend. That’s 15° below average, and it was windy in the bargain: it felt like only 50-something. I couldn’t be bothered. I was still demoralized on Tuesday, so one rest day became two. Today we got back to 80° for the first time since last Friday but there isn’t another 80° day in the 10-day forecast. And the severe lack of rain that has plagued us this year? We’re on our way to solving that! There’s a chance we will see at least some rain every day for the next week.
The Tour of America’s Dairyland has carried on despite the recent rains. ToAd will conclude on Sunday in Wauwatosa. I made a brief appearance in Grafton last Saturday before I had to beat the sunset back to West Bend. Saturday is a work night for me, after all. And I meant to check out Downer Avenue last night but I couldn’t justify the drive down to Milwaukee when the chance of rain was so high. If you insist on racing in the rain, then that’s fine but don’t expect me to stand in it to watch you. This evening I might have gone down to Shorewood but I got such a late start on my day that it was either ToAD or my own ride, and my own ride was more important to me. If tomorrow’s forecast proves true, then the day might be a complete washout and my new streak will come to an end.
This rainy period is threatening Sunday’s WORS race in Waterloo. Saturday’s pre-ride has been canceled and Sunday’s racing schedule has been pushed back to allow pre-riding in the morning. But the whole weekend could be wiped out if we get another 1.5-2 inches of rain in the next 24 hours.
In better news, WEMS announced on Wednesday that there will be a mountain bike race at New Fane on July 10. That’s great for racers in this part of the state. Without New Fane on the calendar, the closest WEMS venue was Wausau … more than 150 miles from West Bend.
Finally, the Tour de France will begin tomorrow. I won’t be following the live TV coverage the way I once did. For most stages, I will rely on YouTube for highlights. But two stages will be shown on standard broadcast TV. Tune into NBC—that’s Channel 4 in the Milwaukee market—to watch Stage 14 on Saturday, July 10, and Stage 21 (the finale on the Champs-Élysées) on Sunday, July 18.
Posted by Dave Hanrahan at 10:00 PM No comments: 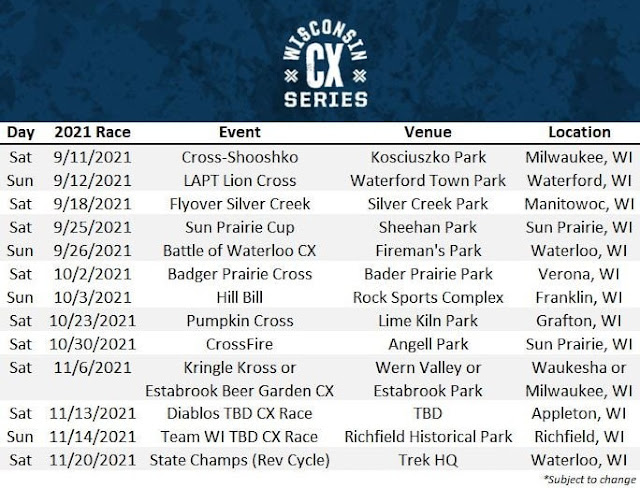 The Wisconsin Cycling Association announced its 2021 cyclocross calendar today and Washington County will have a race for the first time in almost a decade. But that race won’t be at River Hill Park in Kewaskum, where we raced in 2011 and 2012. The new venue is Richfield Historical Park.
There are always some differences between the season that is planned and the season that is raced, and the schedule in its current form recognizes the uncertainty still presented by the COVID-19 pandemic. So, expect some changes but start looking forward to the season.
Posted by Dave Hanrahan at 9:00 PM No comments:

Return Of The 200-Mile Week

I was on my way to my first 200-mile week of 2021 last month when bad weather wiped out Sunday the 23rd and I had to settle for a lousy 179. But this week I flew past the 200-mile mark, finishing with 246. I spent 15 hours, 15 minutes in the saddle. It was my biggest week of training since September 21-27 last year, when I rode a personal best 283 miles in 16:44. Stringing together 90° days is always going to meet with my approval, but I could do without the wind. I’m happy with the numbers I put up this week, but they would have been even bigger if I didn’t feel limited by high winds.
Posted by Dave Hanrahan at 8:00 PM No comments: 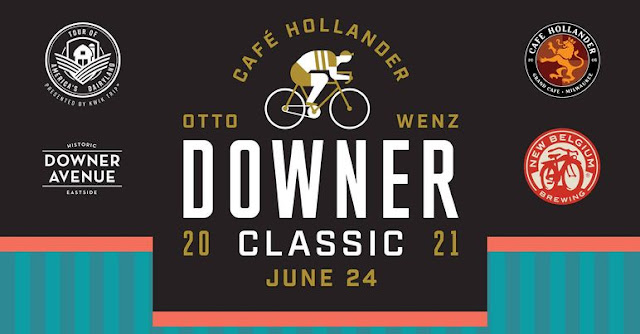 Was it only Monday that I was lamenting the absence of the Downer Classic from this year's Tour of America's Dairyland schedule? ToAD caught me off guard in a good way today by reinstating the race. The Downer Classic won't occupy its usual Saturday slot, but a Thursday works even better with my weird work schedule. See you there!
Posted by Dave Hanrahan at 2:00 PM No comments: