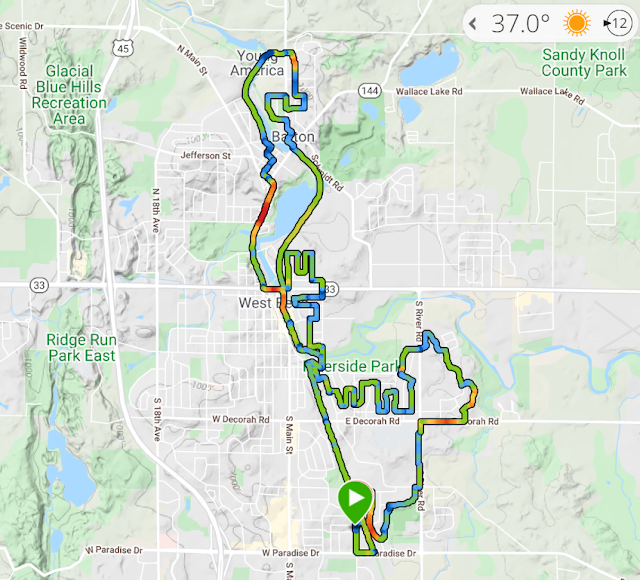 Slow and short, but who cares in February? Today I rode my bike outside for the first time since December 10, exactly 11 weeks ago, and the weather forecast looks good for this time of year.
Posted by Dave Hanrahan at 5:05 PM No comments:

The Way I Use My Walk

Most of us learn to walk by the time we’re 1 year old and then don’t think about it thereafter. But bipedalism is pretty cool. For one thing, it allows us to carry way more stuff than we could otherwise, and that’s a useful adaptation when we’re gathering food or assaulting our enemies with any number of clever handheld weapons.
I’ve been walking a lot during the last few months—I didn’t miss my chance today, the first 40° afternoon in West Bend since December 23—and I haven’t just enjoyed walking; I’ve enjoyed how I walk. It’s purposeful and efficient. It’s head up, shoulders back, eyes straight ahead. It’s maybe a little haughty, maybe a little disdainful of the shoegazing shufflers who wouldn’t last 5 minutes in the wild without being eaten by something they never saw coming. It’s also the product of some refinements over the years, most notably in high school when a female classmate pointed out how pigeon-toed I was. I haven’t been pigeon-toed since; I’ve trained it out of my gait.
I’m closing in on 100 miles of walking this year. That’s walking expressly for fitness, not counting my steps during everyday activities. This will be the first full year with data, so 2022 will be the first full year of trying to beat old records! That’s just how I’m wired. So, what are we talking about … 500 annual miles? Could be. Walking has been great for offseason cross-training, but I’m still principally a cyclist and our improving weather forecast is going to compel me to start riding again very soon. I think there will be time enough for both, but cycling is going to win if there’s only enough time for one.
Posted by Dave Hanrahan at 5:00 PM 1 comment:

Ever so briefly, in West Bend today we surpassed 32° for the first time since February 4. (The last 2.5 weeks weren’t just below freezing, they were way below freezing.) But the wind was biting today, and the absence of sunshine also made things feel much colder than the thermometer led us to expect. With a few days around 40° in the forecast, I might be riding outdoors sometime in the week ahead. Today was still too cold for that, but it was good enough for a hike on the Ice Age Trail in the Northern Kettle Moraine.
I did a 5-mile, out-and-back hike on a section of trail that I had not seen before, roughly from St. Matthias Catholic Church to New Fane. There was plenty of elevation change, plenty of snow, a steady hum of snowmobile engines, and a very unexpected encounter with a horse-drawn sleigh. It was a good workout and a good break from the home office, where I spent entirely too much time during the last week.
One of these days—a warm, snow-free one—I want someone to drop me off at a distant trailhead so that I can spend a whole day on the trail just walking home. There’s so much of it nearby and so much more for me to see for the first time.
Posted by Dave Hanrahan at 7:30 PM No comments:

To be precise, the middle of winter was last Wednesday, February 3. If you’re a “glass half full” person you could say that winter is more than halfway done. But in West Bend winter pays no attention to the spring equinox, which this year will occur on Saturday, March 20. No, in West Bend winter might hang on all the way through April. You just never know. And when it comes to our weather, I’m very much a “glass half empty” person. I expect the worst and, for what it’s worth, I’m seldom wrong. So, it’s no surprise to me that here in the reputed latter stages of winter we’ve now had 8 consecutive days with below-zero wind chill and we’re going to have at least 4 more before the big warm-up that gets us close to 20°.
Historically, the average high temperature in West Bend in February is 31° and, as you would expect, the month typically begins below the freezing mark and finishes above it. Right now we’re at the turnaround point … historically. The average high on February 12 is 32°, but on this February 12 we made it only to 9°. It was properly cold despite brilliant sunshine, and with the wind chill the mid-afternoon “feels like” temperature was -8°. Riding my bike was absolutely not an option. I did, however, get some outdoor exercise.
In early December I wrote about the potential of Garmin Connect to encourage me to exercise more during the winter. And it has: by the end of that month I had completed 12 walks for a total of 44 miles. In January I did 11 walks for a total of 50 miles. So far this month I have walked 4 times for a total of 18 miles, including a 3-mile walk today. I would have done a few of those activities even without Garmin Connect, but there’s no doubt that I was driven to do more by the ability to track my efforts and to be rewarded for them with Garmin’s badges and points. Don’t let it trouble you that the badges are just computer icons and the points have no monetary value. The 17 badges and 22 points I have earned since December 1 were mostly rewards for exercising consistently. And that’s really all I have to do at this time of year.
Questing for badges and points encourages me to do a variety of activities. I mean, you can’t earn a walking badge if you do nothing but cycling. Variety is beneficial for any number of reasons—e.g., strengthening muscles that I can’t target effectively on the bike, promoting bone cell growth in ways that zero-impact sports do not, breaking up the monotony of single-sport training, and so on. Perhaps in 2021 I finally will commit to aerobic cross-training throughout the year, not just during the cycling offseason.
I am already thinking about how I might accommodate a two-a-day plan when I start riding outside again. I like the idea of an early morning 5K ruck march and a late afternoon bike ride, at least early in the season when outdoor rides are relatively short. Burning an extra 2,500-3,000 calories per week simply by walking couldn’t be a bad thing. I didn’t gain a single pound in January. That’s unusual and obviously welcome and certainly a product, at least in part, of all that walking. But I’ve been a little piggy this month and will have to make amends before my weigh-in on March 1. Garmin called me outside today with a promise of 2 different badges that I could earn with a single activity, so I bundled up and did just enough to meet its requirement. That’s not really in the spirit of the challenge, but it’s more than I would have done otherwise. Now I have to motivate myself for the remainder of February. Game on, again.
Posted by Dave Hanrahan at 4:30 PM No comments:

On the heels of last week’s announcement of a 2021-2022 UCI Cyclocross World Cup season that will begin with 3 dates in the United States comes today’s big news: the 2021 USA Cycling Cyclocross National Championships will be held in suburban Chicago, December 7-12. It’s a do-over for Cantigny Park in Wheaton IL, whose plans to host the 2020 championships were wiped out by the COVID-19 pandemic.
This news has obvious ramifications for the Wisconsin cyclocross schedule, as our state association recognizes that many of our racers will participate in a national championship week so close to home. With top domestic pros and many amateurs competing on the prior weekend at the UCI Pan American Cyclocross Championships in Oklahoma, don’t be surprised to see a USA Cycling regional championship on December 4 or 5 somewhere in the Upper Midwest. And if that happens, then look for the Wisconsin state championships no later than November 27 or 28.
For what it’s worth, Illinois and Wisconsin typically hold their state championships on consecutive weekends, and there’s some cross-pollination—no pun intended—by racers who want to compete even if they are ineligible for another state’s title. But that won’t be the case this year: the Illinois championships will be held on October 2 in downstate Beardstown.
If that seems awfully early and awfully far away from Chicago, then you’re not wrong. But the Chicago Cyclocross Cup pulled the plug on its season early in 2020, leaving Beardstown as the only applicant for the state championships. Those races ultimately were not held due to the pandemic, but Beardstown’s bid will carry over to this season.
Posted by Dave Hanrahan at 4:00 PM No comments:

If this actually happens, then 2021-2022 will be the biggest season in the history of American cyclocross. The first 3 of the 16 races on the World Cup calendar will be in the United States, including a return to Trek headquarters on October 10. And we’ll host the UCI World Championships next January in Arkansas. Go away, coronavirus. Don’t wreck this for us.

Posted by Dave Hanrahan at 5:55 PM No comments: