I knew coming into 2018 that I wouldn’t be doing as much mountain bike racing as I did in 2017. Today my plans were further simplified by the release of a revised WEMS schedule. The first draft of the WEMS schedule suggested not one, but two races at Silver Lake Park in Kenosha County, and I was enthusiastic about the prospect. Then it became clear that the second race was a Copy & Paste error from the 2017 schedule, and as of today there is no race at Silver Lake Park. That’s disappointing, as I really enjoyed riding and racing on those trails last year.

But there’s good news too: the Stump Farm 100 has moved from May 19 to September 29. That probably means warmer, drier weather, and it definitely means I will be far more fit! The way things are going, I can’t imagine being in race shape by May 19. And September 29 should be an open date on the WCA cyclocross calendar, as that weekend is reserved for Jingle Cross, a popular event in Iowa that siphons off a big percentage of Wisconsin’s racers. Jingle Cross isn’t in my plans, so knocking out an endurance mountain bike race at the end of September will be a great way to keep my training volume high.

While I was rearranging my events calendar today I decided to remove the short track race at the WORS Cup on July 8. It just didn’t make sense, especially since I have no other WORS events on my schedule. If that race were in August, then it might be attractive as a fitness test heading into the cyclocross season. But as it stands, it doesn’t serve any larger goal.

So, all of those changes mean I’m not planning to race until August! And that’s OK. It’s still winter here, after all. Don’t believe me? Look at next week’s forecast:

Welcome, April?
Posted by Dave Hanrahan at 6:30 PM No comments:

Washington County’s leading community groups have banded together to bring you a Summer of Cycling. Enjoy it! 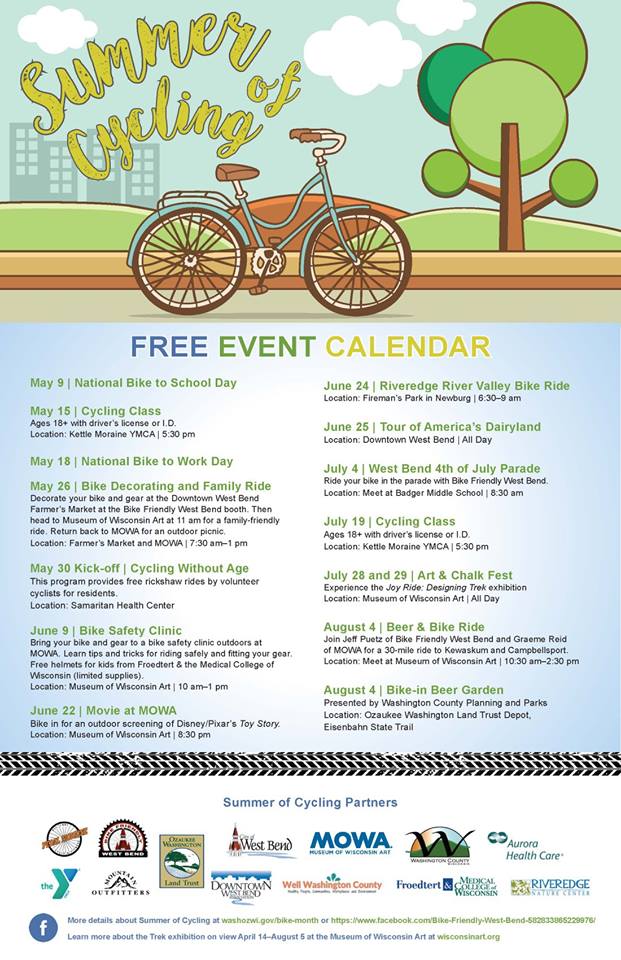 Posted by Dave Hanrahan at 2:00 PM No comments:

Put Up Or Shut Up

Two weeks from today, voters in the City of West Bend will have an opportunity to suggest funding solutions for street maintenance. They shouldn’t miss the chance. Goodness knows, they haven’t missed any chance on Facebook and Twitter to complain about the condition of our streets. But talk is cheap, and our Common Council knows it. The city recently hosted three public input sessions to get a better understanding of these complaints, and a grand total of five people attended. So, on April 3 the referendum on street maintenance is only an advisory referendum—i.e., the city will be under no obligation to act on the results.

The city would like you to know that it already spends least $1,000,000 a year on maintenance, and that the amount is increasing by 4% every year. And that sounds like a lot of money until you divide it by approximately 500 lane miles of city streets. Fortunately, not every mile needs repair every year, but that’s little consolation if the miles that need repair now are the miles you need to travel. West Bend’s streets are atrocious. What’s a voter to do?

Here are your choices:


Good luck with that last one. The county has already rejected the idea.

What, then, can we do with the first three referendum choices? Not much. The first two suffer from an all-too-familiar problem: they raise taxes without guaranteeing that the new revenue will be used for its intended purpose. The $20 vehicle registration fee is the only choice that does. As District 5 Alderman Rich Kasten explained in his January 3 letter to the Common Council, “While the ‘wheel tax’ has negative connotations, it is currently the only solution that designates funds explicitly for road projects. We cannot bind future councils to property tax increases being used for road projects.”

A municipal wheel tax is going to be a tough sell. Like the first proposal, it would generate more than $600,000 of new revenue per year. But vehicle owners already pay an annual state registration fee of $75, and it’s only a matter of time before that goes up.

It’s fair to ask where this will end. Will Washington County eventually come looking for its own wheel tax revenue, too? It’s also fair to ask when this will end. None of these proposals has a sunset date. Voting for any of them could lead to a tax increase that endures long after the immediate concerns about street maintenance have been addressed. And your choices don’t include an option that raises enough revenue by itself; in every case, the extra money becomes the city’s “down payment” on projects it will go further into debt to finance.

Putting more money into our streets would make them better for everybody, and that includes cyclists. There are a few streets that I avoid because their seams and potholes are so jarring. I can somewhat compensate with wider tires at lower pressure. After several days in a row on my road bike, I recently hopped aboard my cyclocross bike for a ride around town. Right now, my cyclocross bike is outfitted with 700x32 slicks at 60 psi. The difference in comfort between that setup and my road bike—700x25 tires at 100 psi—was remarkable. But it shouldn’t be up to me to adjust to the shortcomings of public infrastructure. Imagine asking motorists to get new tires that are more suitable for our rough streets!

I predict the referendum will come to nothing. Turnout will be low, the public will continue to make ill-informed complaints via social media, the city will have discharged its responsibility merely by asking the questions, and we will go on as before.
Posted by Dave Hanrahan at 2:00 AM No comments:

Here’s another example of a small effort that eventually will have a big impact. The City of West Bend has punched a hole through the woods on the west side of Ridge Run Park to make way for a connection to the Cedar Community, a residential development for seniors. 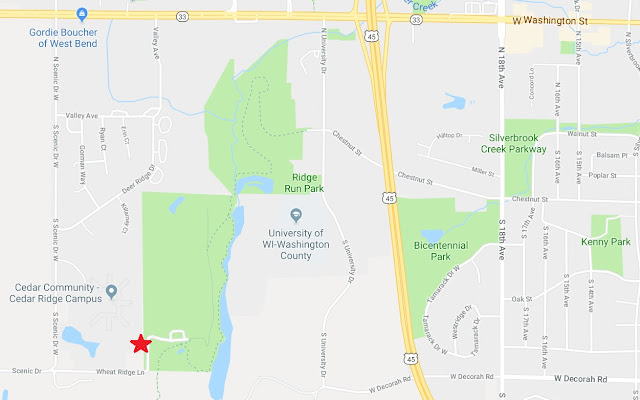 Soon, Cedar Community residents will have easy access to the trails and picnic pavilions at Ridge Run. A little farther into the future, Cedar Community will partner with Bike Friendly West Bend to create a Cycling Without Age program like the one that will begin this spring at Samaritan. You wouldn’t get a heavy rickshaw through this lane today—it was tough enough for me and my cyclocross bike yesterday … 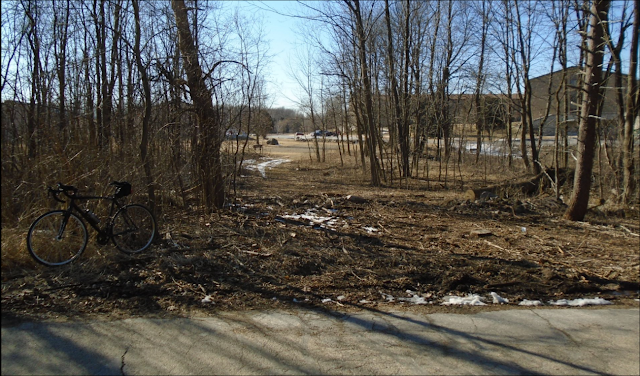 but when it’s completed, the new path will be a pleasant way to get into the park. It’s one more step toward a bike-friendly city.
Posted by Dave Hanrahan at 5:05 PM No comments:

Pilots Needed For Cycling Without Age 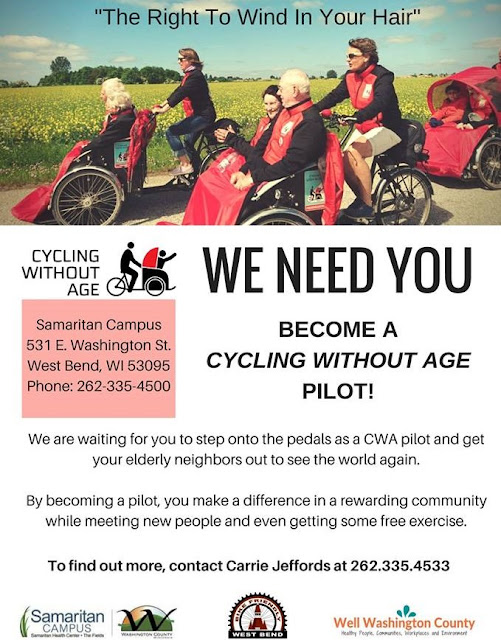 Posted by Dave Hanrahan at 4:11 PM No comments:

On Monday evening the Common Council of the City of West Bend unanimously approved Resolution 49, “a resolution supporting the grant application for a comprehensive bike route system through the Wisconsin Department of Transportation 2018-2022 Transportation Alternatives Program (TAP) award cycle.” Here’s what the resolution says:

WHEREAS, the City of West Bend has been made aware of a highly competitive grant program through the Wisconsin Department of Transportation (WisDOT) called the Transportation Alternatives Program, which funds bicycle and pedestrian plans at an 80% grant with a 20% local match; and

WHEREAS, the City of West Bend recognizes the benefits of multimodal transportation choices for its residents and visitors; and

WHEREAS, the City of West Bend and Bike Friendly West Bend have formed a partnership to increase the community’s access to bicycle friendly infrastructure for the purpose of providing safer transportation routes, raising awareness and reducing crashes; and

WHEREAS, the City of West Bend supports the TAP application as prepared and submitted to WisDOT by City Staff and Bike Friendly West Bend for the 2018-2022 award cycle to provide for a comprehensive bike route system including maps, pavement markings and signage; and

WHEREAS, the City of West Bend recognizes that WisDOT reimburses project sponsors for the federal share of 80% of the approved TAP project costs, up to the limit of the federal award amount, and City’s obligation to secure and commit the required 20% match from private community fundraising.

NOW, THEREFORE, BE IT RESOLVED, if the City of West Bend is awarded funding by WisDOT for the 2018-2022 TAP award cycle the City is authorized to prepare all necessary agreements with WisDOT for the project described in the application for presentation and final approval by the Common Council; and

BE IT FURTHER RESOLVED, the Common Council of the City of West Bend hereby supports City staff to submit and comply with all applicable laws, requirements, and regulations as outlined in the WisDOT 2018-2022 TAP application materials, and any other program and/or project documentation.

That’s a lot of words, and there isn’t one more important than “if.” Authorizing its staff to apply for a grant does not guaranty West Bend will receive an award from WisDOT. But adoption of this resolution is an important step. It signals the willingness of the city’s elected officials to work with and on behalf of Bike Friendly West Bend. Back in December when BFWB appeared before the Common Council, there seemed to be little support for the bike plan. This week’s action creates a way to move forward.
Posted by Dave Hanrahan at 2:00 PM No comments: 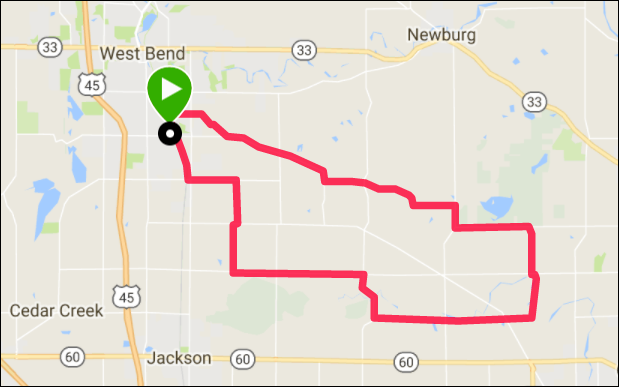 I didn’t impress anyone today, that’s for sure. And by “anyone” I mean fellow West Benders Jeff Wren (Team Extreme) and Jim Saueressig (Gryphon Velo), with whom I have ridden thousands of miles over the years. Today we did 25 together—the trusty Covered Bridge Ride—and I didn’t have much to contribute. Going into a 15 mph wind for the first half of the ride was frustrating for me, and sometimes just following a wheel was more than I could manage.

But if you want a silver lining, here it is: at 16.1 mph, today’s ride was the fastest of my 17 rides this year. You have to go back to December 3 to find a faster one. I’ve been doing a lot of rides around town, often on my 29er or my cyclocross bike, and I haven’t been worrying about speed. It’s still winter. I’m a long way from fit but also a long way from any competitive goals. I rode 6 days out of 7 this week, a total of 8.5 hours. You have to go back to September 18-24 to find a bigger block of training on my calendar.

This month is off to a good start, however unimpressive I looked today. We’re facing some snow and cold temperatures in the week to come, but we should get back to sunny and 40° by next weekend. I will have daily broadcasts of Paris-Nice to take my mind off the weather, and on Friday the new UCI World Cup mountain bike season begins, giving me even more to watch. Next Sunday, Daylight Saving Time will return, creating more opportunities to ride with friends on weekdays. I’m slow and fat right now, but I'm choosing to be positive!
Posted by Dave Hanrahan at 5:00 PM No comments: