Worthy Of A Record, But Not A Record

It was a busy month in the saddle. I spent almost 54 hours on the bike: 27 rides for a total of 902 miles. That’s my second-highest mileage total in any month ever, beating last month’s 880 miles. But it’s not a record. I still haven’t topped the 1,020 miles I rode in July 2011.
And I still haven’t caught last year’s pace, but I’m close. At the end of July 2020, I had amassed 2,918 miles. Right now I’ve got 2,847 … with 11 fewer rides. That small difference in total mileage combined with this season’s higher miles-per-ride average has me thinking about making this another 5,000-mile year. Getting to that threshold wasn’t in my original plans for 2021, but it’s a very real possibility now. I haven’t had back-to-back 5,000-mile seasons since 2015-2016.

Bring on August!
Posted by Dave Hanrahan at 6:00 PM No comments: 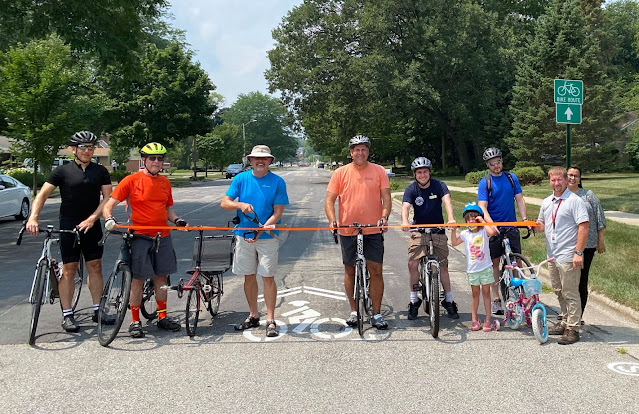 Dedication is the word of the day. It works on two levels. First came the dedication of Bike Friendly West Bend to create on-street bike routes in the city. It was the work of more than 5 years, and in 2017 the dream looked like it was over when the city’s Common Council refused even to vote on the idea. But BFWB stuck with it, breaking down a big plan into smaller, easier-to-digest chunks. Last December the city approved one of those chunks: the Orange Loop. And today BFWB met with city officials at the intersection of Sylvan and Vine for a short dedication ceremony to mark the opening of the route. Mayor Chris Jenkins and City Administrator Jay Shambeau were among those on hand.
After the ribbon-cutting, Shambeau rode the loop with BFWB representatives. It was an opportunity for BFWB to share its observations with someone at City Hall who is in a position to help. Along the way, I commented that the Orange Loop goes where it goes so that it can connect what needs to be connected: residential neighborhoods, schools, parks, and the Eisenbahn State Trail. To the dismay of some critics, the loop does not always travel the best-maintained streets. And one or two intersections will feel a little challenging to a less-skilled, less-confident rider. Witnessing these limitations and fielding recommendations from long-time local advocates like Jeff Puetz and Rich Ramsey will give Shambeau a first-hand perspective to share with city employees and elected officials.
I rode to the dedication ceremony, took the tour, then rode home again. At only 8 miles, it was the shortest ride I’ve done for a while! But it was an important ride. It was a way to show appreciation for the combined efforts of BFWB and City Hall, and it was a chance to have the attention of people in government in a casual but still respectful and collaborative way. It’s only in that way BFWB has been successful, and it’s only in that way BFWB will succeed in the future.
Posted by Dave Hanrahan at 9:00 PM No comments:

The Next Two Months 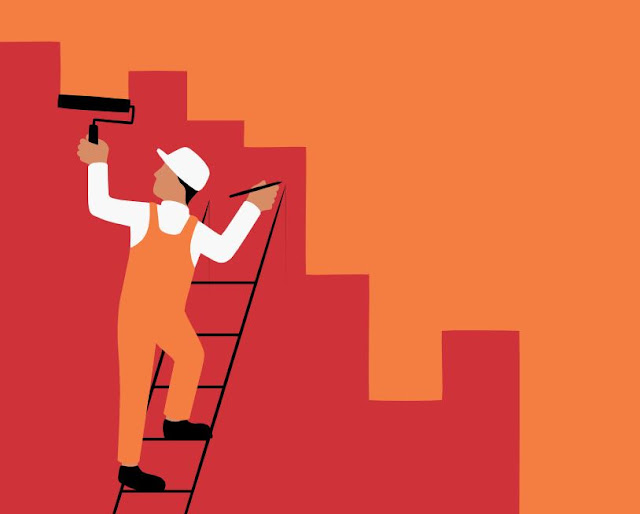 Yesterday I announced to the  West Bend Cyclocross group on Facebook  that I won’t be hosting a practice series this summer. The series ran at Royal Oaks Park from 2012 through 2019, then got wiped out by the pandemic in 2020 along with the entire WCA season. There will be cyclocross in Wisconsin this fall and I intended to bring the practice series back, but my priorities have changed.
In late September my oldest child will return to the nest to enjoy rent-free living and, I presume, accelerated student loan repayment! I couldn’t be more delighted; the house has been empty without my kids. But now there are household projects that just won’t wait any longer, and many of them can be done only with fair weather. None of this stuff was unexpected, but I had a longer timeline in mind when I was building my project list. Fresh paint, new carpet, various other decorating touches … it’s going to feel like a new house, not like the one I have occupied for 20 years. And there will be no shortage of work outside, where the trees are dying but the bushes and weeds are overgrown. Can’t forget about that September 18 block party on my street. I don’t want my house to be that house.
Also, it looks like there will be an East Coast vacation for me in October, which serves as an additional incentive to finish the household projects by the end of September. But as that trip will coincide with one or two WCA cyclocross races, it’s an additional disincentive to commit to the season. I’m still knocking out 12- to 15-hour weeks on the bike, typically surpassing 200 miles per week. My commitment to ride has not changed. But racing is a bad fit at the moment. It wants time, energy, and money when all three are needed elsewhere.
Posted by Dave Hanrahan at 4:00 AM No comments:

Nice day! I did a 2-hour Ice Age Trail hike in the morning … 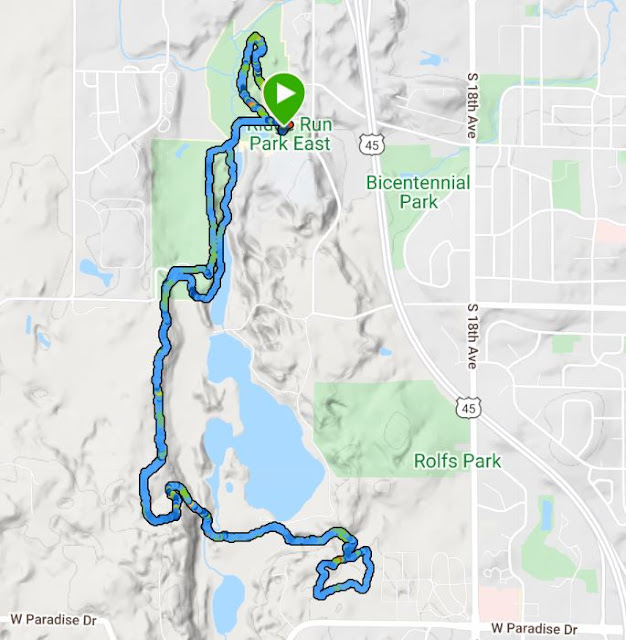 and a 2-hour road bike ride in the evening … 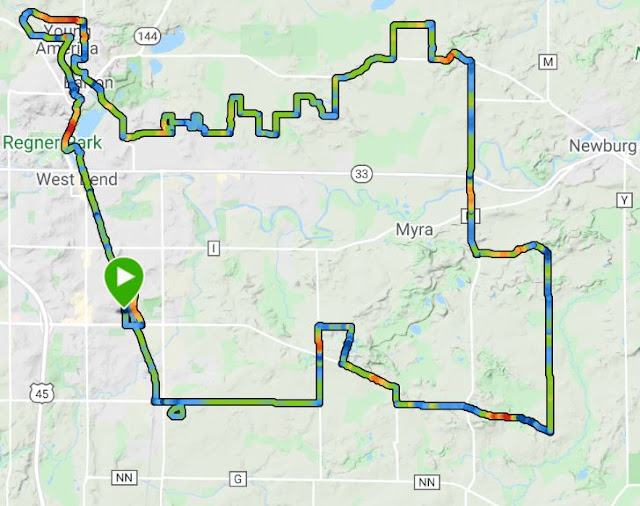 Each activity completed a 2-point Garmin Connect challenge, so I earned 2 new badges.
It’s good that I continue to find motivation from Garmin, because I’m not finding it in many other places. I am planning for some home renovations and a week-long October vacation, but so far those are only plans. I could use something new and novel right now when things are, frankly, kind of a grind. I’m doing a good job, but sometimes it seems like my only reward is that I get to do the same good job tomorrow.
Posted by Dave Hanrahan at 10:22 PM No comments:

I averaged 17 mph on Friday’s 42-mile road ride, but as I got close to home the 0.7-mile section of Paradise Drive between 7th Avenue and Stonebridge Road demanded something more. Outside of the city, Paradise Drive is a treat! Within city limits, I usually avoid it. Paradise is one of the least bike-friendly streets in West Bend: too many cars, too many traffic lights, too many conflict points. But for whatever reason, on Friday evening I took it on … and even had fun with it. The secret is speed. Or maybe that’s obvious and not a secret at all. Whatever. Get up to automobile speed and you’ll be fine. Looks like I even had a little burst above the 25 mph speed limit. Sorry, WBPD, got to go along to get along. I was hardly the fastest vehicle on the road; I was just fast enough not to be an impediment. Not one horn sounded. Not one middle finger extended. Not one driver shouted for me to get on the sidewalk … and woe to any pedestrians if I had. Bikes are vehicles. They belong on the streets. The more we share the road with cars in a safe and courteous manner, the more we normalize our presence and improve the relationship between riders and drivers.
Posted by Dave Hanrahan at 1:00 AM No comments: