Août With A Bang 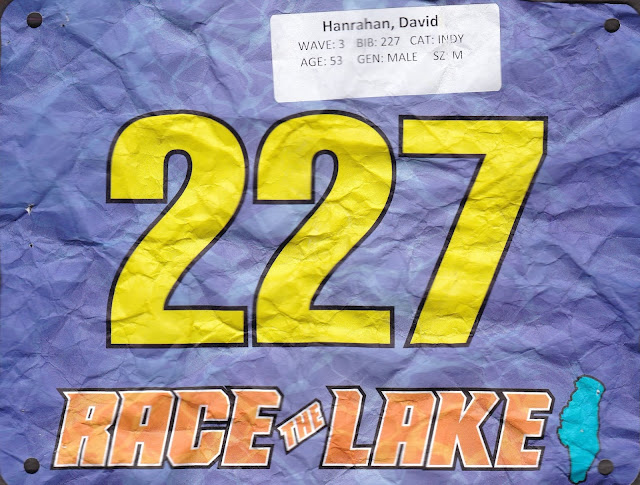 And I thought I had a good ride last year!

Today I did my first race of 2018: Race The Lake, Wisconsin’s biggest road race. I first did the race back in 2016, and I had a pretty good result despite a rear tire puncture with just a few miles to go. I went back last year for the 10th Anniversary edition—a 100-mile course instead of the normal 88 or thereabouts—and I had an even better result. But today … wow!

After performing so well last year I was willing to move into Wave 3 on this year’s starting grid. Wave 1, a.k.a. the Pro Wave, seemed beyond my ability. Even Wave 2 seemed like a stretch, so my first thoughts were not positive when the race organizers announced that Waves 2 and 3 would start together. But I soon lost any concerns that I didn’t belong. We flew up to High Cliff State Park, the halfway point of the race and home to its only real hill climb. And even the hill seemed easy this year. I was on a storming ride: fit, confident, and sitting atop a perfectly-tuned bike.

I think a lot of people get fooled by Race The Lake. The climb at High Cliff has a reputation that exceeds the reality. Getting up it is good, but don’t think the worst is behind you. The west side of Lake Winnebago is pan-flat, but the east side features a succession of rolling hills. They’re not hard when considered individually, but their cumulative effect is the difference between a good race and a bad one. I met every challenge. On a couple of occasions when others faltered, I rode across gaps to stay with the leaders of the wave. And if I stuck my nose into the wind only briefly, I was always within a shout of the front.

In the final miles I was contemplating a repeat of the move that was so successful last year: descend hard into Taycheedah and then time trial on the flat roads back to Lakeside Park in Fond du Lac. Unfortunately, I didn’t get the chance. A terrible crash in the Pro Wave left carnage on the road ahead. Law enforcement stopped us, then directed us onto the sidewalk for a brief detour. We resumed quickly but much of the cohesion in the group was gone.

At least, I think it’s good for 88th Place. The race organization has altered the results since I left Fond du Lac late this morning. It’s trying to be fair to the fast riders in the waves that started after mine, some of whom were stopped at the crash scene for more than an hour when law enforcement demanded that the race be neutralized to allow emergency crews to do their work. I was lucky to pass that point just after the crash. I don’t really know who won; I know only that I had great race.

My day got even better when I saw that Laura Van Gilder was the undisputed women’s winner. Like me, she’s 53 years old and a native Pennsylvanian, so it’s easy for me to root for her. We spent a few minutes talking after the race and she couldn’t have been nicer. Not sure if she remembers meeting me at Tour of America’s Dairyland races at East Troy and West Bend in years past, but she does follow me on Twitter, which counts for something!

Putting On Our Climbing Legs

We had another good cyclocross practice today at Royal Oaks Park in West Bend. This was Week 3 of 7, but I’m calling it the halfway mark because I did a new bike shakedown there on July 31 before the series began. During that July 31 session—my first experience with 1x gearing—I learned how challenged I would be to climb a tough hill with a 40T chainring and an 11-28 cassette. Sure, I could get up the steepest climbs at Royal Oaks, but that’s not the goal. I need to get up the big hills of the WCA series—Manitowoc and Grafton—lap after lap, at race speed. Those are hard enough to climb when conditions are ideal; imagine them with tall, wet grass.

So, my Trek Boone is now outfitted with an 11-36, giving me more climbing gears with no compromise on top-end speed. I didn’t have that solution in place in time for the practice season opener, but it worked well last week on a mostly-flat course and today on the hilliest configuration we have used so far this year. I didn’t even need to install a new chain; this was a simple cassette swap. (And I was able to bring the project in far below the $125 I had expected to pay.) I’m very happy with the performance of the bike now.

Last night’s heavy rains left the wooded trails of Royal Oaks soft and damp, so today’s course took the short way through … which meant using the west side of the sledding hill to make the course long enough. Aside from that concession, the grounds were in great shape. With my new bike set up properly, I felt like I was in great shape too. I didn’t have an answer for Wade Loberger (Team Wheel & Sprocket), winner of our practice race, but I was a strong 2nd Place. Practice is working for me, putting an edge on my fitness at just the right time. It’s a hard transition after months of long-steady-distance training, but it’s going well.
Posted by Dave Hanrahan at 8:08 PM No comments:

A Great Resource For Public Input 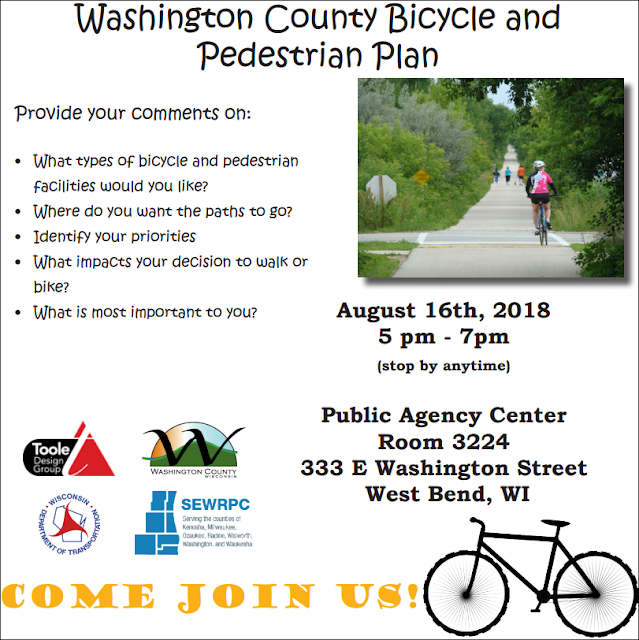 There’s an important public input session later today during which Washington County officials will collect comments about bike and pedestrian issues and opportunities. I encourage you to attend. This will be your best chance to influence the process that will result in a master plan by Spring 2019. The County Board already has pledged money for the plan. It’s going to happen!

If you can’t attend the public input session, then here’s a great alternative. The online mapping utility is fun and easy to use. Identify the barriers to safe and convenient bicycling and/or walking, or pick new destinations … it’s up to you! I have been annotating the heck out of the map today and I’m sure I will continue to think of things, as this utility makes it so easy to give input. 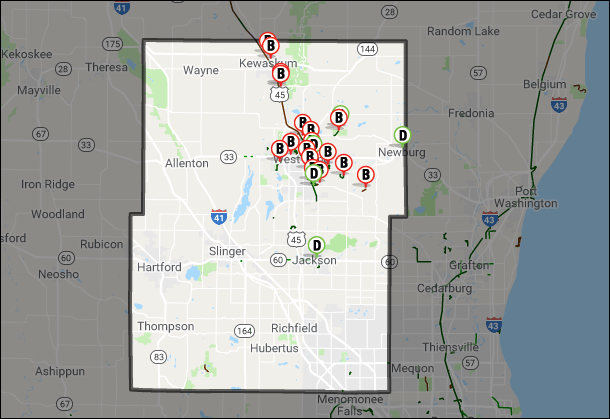 Posted by Dave Hanrahan at 3:00 PM No comments:

Warmup On The Wild Goose

Race The Lake—my first competitive event of 2018—is now two weeks away and while I’m not worried about covering the 88-mile course I am keenly aware that I haven’t done many long rides this year. Today’s 69-mile excursion on the Wild Goose State Trail was just my 4th metric century of 2018. My longest ride was 90 miles, back on June 17. That might remain my longest ride of the year, as I’m going to be all about cyclocross once Race The Lake is behind me. But in the next two weeks I will try to do at least one more metric century. Replicating the duration of Race The Lake is more important than replicating the distance, as group dynamics and raceday adrenaline will count for plenty on August 26.

Like most recreation trails, the Wild Goose is very flat and its unpaved surface is best experienced on something other than a road bike. My Diamondback Steilacoom was the right choice today. I was tempted to use my new Trek Boone—outfitted with backup wheels and tires, of course—but I’m going to try to preserve the Boone as a race-only machine. Jeff Wren (Team Extreme) joined me today, riding the Felt that had been his cyclocross racer prior to this season. We got rained out back on August 5, 2017, when we last attempted to ride the Wild Goose, so this was our first trip on the trail since May 15, 2015.  The Wild Goose is nice, but it’s not appreciably different from the Eisenbahn State Trail here in Washington County. An annual visit is often enough.

This was a very solid 12-hour, 197-mile week. I’ll do another big block next week too, then I’ll taper for Race The Lake. I had abundant energy today—don’t be fooled by the very ordinary average speed in the graphic above—and I seem to be on the right trajectory.
Posted by Dave Hanrahan at 8:00 PM No comments: 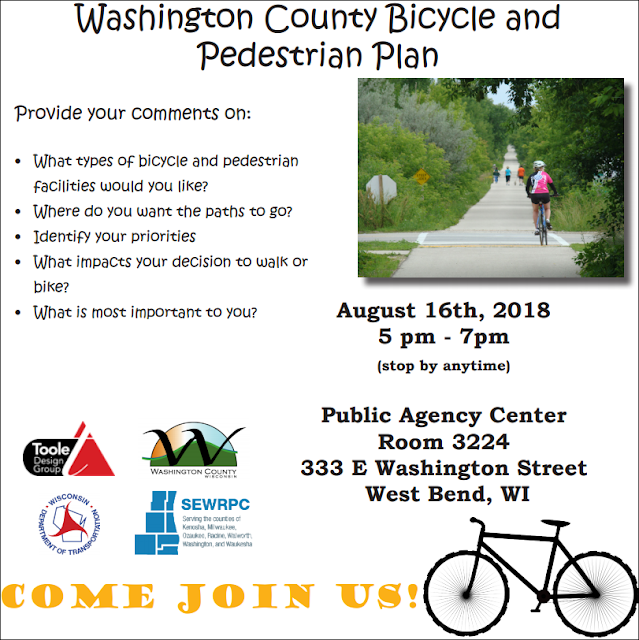 Posted by Dave Hanrahan at 9:45 AM No comments: