On The Ryan Braun Situation 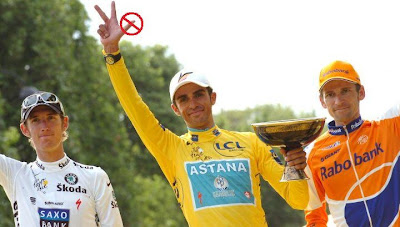 Let me get this straight: Alberto Contador loses his 2010 Tour de France title because of a positive test for a trace amount of clenbuterol, a substance which he could have ingested accidentally and whose concentration in his body was too small to have produced a performance-enhancing effect, but Ryan Braun keeps his 2011 National League MVP title despite a positive test for a huge amount of synthetic testosterone, a substance which could not have entered the body accidentally in a concentration more than seven times the amount that constitutes a violation of league policy.  Whoever said “cheaters never prosper” simply had the wrong team of lawyers.

I’m just about done with baseball.  The Braun ruling is the latest in a long series of insults to me as a fan.  During the era of Barry Bonds, Mark McGwire, Sammy Sosa and Rafael Palmeiro, baseball was unwilling to address its doping problem in a meaningful way.  Today it appears willing but remains unable.  The effect is the same: the integrity of the game is compromised.  And I’m a purist anyway.  I believe the game was better before it lowered the pitcher’s mound, brought in the fences, created the designated hitter, placed interleague games on the regular-season schedule, and added wildcard teams to the playoffs.

My absence from Miller Park will go unnoticed.

The mood in Milwaukee is celebratory today and you shouldn’t doubt that Braun will be received warmly when the season begins.  He’s ours.  He couldn’t have done what they say he did.  Now, accusations against Albert Pujols we would have believed.  We would have been scandalized had he escaped on a technicality, because everyone knows the Cardinals cheated us out of the pennant last year.  Get ready for another round of baseball’s answer to Stockholm Syndrome, that same suspension of disbelief that allowed Bonds to bask in the love of San Francisco Giants fans for 15 seasons while the rest of baseball recognized him for the cheater he was.

The law finally caught up with Bonds but instead of prison time he was sentenced to 30 days of home confinement … in his Beverly Hills mansion.  He’s still the all-time home run king and a 7-time MVP, honors that will never be taken from him.  If baseball metes out any justice at all, it will be in the form of delaying or denying Bonds entry in the Hall of Fame, as it has done to Pete Rose.  Braun is still early enough in his career that his positive doping test will be a footnote as long as he avoids further trouble.

On the morning after the Braun decision I’ve already seen opinion pieces on the future of drug testing in baseball.  The more dire predictions assume that doping controls will collapse now that attacking the testing process itself has proved a winning strategy.

What bothers me most is the attitude of fans whose only concern is whether performance-enhancing drugs are being used by rival athletes.  When accusations fall on one of their own, either those accusations are false or their boy is merely doing what he must to compete in a sport full of cheaters.  (Lance Armstrong apologists, you know who you are.)

Football is undeniably America’s premier sport—and here, again, we’re all happily fooling ourselves about how much human bodies can achieve without PEDs—but baseball still holds a cherished place in our collective heart.  Cycling is a niche sport of European origin, and much easier to dismiss as dirty.  But cycling is doing more to ensure clean competition than baseball and football probably ever will.  Its willingness to punish big stars like Contador, Alejandro Valverde and Jan Ullrich is a stark contrast to baseball’s record with Braun and players like him.
Posted by Dave Hanrahan at 10:52 AM