The Thrilla’ On The Hill-a 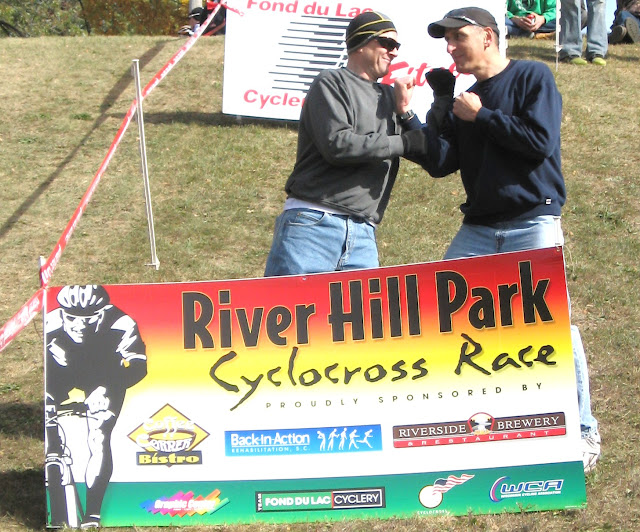 In this weekend’s WCA cyclocross action, Wren vs. Hanrahan was unavailable on pay-per-view … but it was tape-delayed.  And Saturday’s shocking finish set up a big rematch that went the distance on Sunday.

On Saturday I returned to Milwaukee’s Mitchell Park, home of the famous domed botanical gardens and the site of my first-ever cyclocross race last October.  In my debut I was 9th out of 18 in Masters 45+ Cat 4; this year I hoped for more.  My pre-ride went well, revealing a course that was substantially different from last year’s.  Gone were the sand pit and the barriers, replaced by a steep hill that few riders in my category could ride up (and it was immediately clear that I wouldn’t be one of them).  But no big deal: running the hill wouldn’t be appreciably slower than riding it.  I hit the start line confident of a good race.

Early in the first lap I lost a couple of places but I quickly recaptured them.  Team Extreme’s Jeff Wren started well and was staying in contact with ISCorp’s Timm Jacobson, so I was content to follow.  Series leader Dave Dineen of Team Wisconsin was already pulling out a big advantage but I didn’t figure on being close to him anyway.  If Jeff could keep me close to Jacobson, that would be good enough until the final lap.  Troy Sable was hanging tough too, mere seconds behind me.  But early in the third and final lap, Jacobson had gotten enough of a gap on us that he remained in front even after stopping in the pits for a new rear wheel.  I passed Wren to grab 6th place late in the lap, but I no longer could see Jacobson up ahead.

That’s when my race went to hell.  I overcooked a turn and got entangled in course tape, and in the few seconds I needed to free myself, Wren and John Lichtenberg went by.  I barely stayed ahead of Sable and couldn’t close on Wren or Lichtenberg before the end of the race.  I finished 8th out of 20, an improvement over last year but not the result I might have had.  Dineen won to solidify his series points lead.  Wren was 6th and Sable 9th, so West Bend riders took three spots in the Top 10.  West Bend’s Mike Bown won the Masters 55+ Cat 4 race.

The course at River Hill Park in Kewaskum was brilliant, and, just like last year, racers were amazed by how much the organizers could do with such a small space.  The outstanding feature of the course was a short but super-steep hill that I couldn’t ride, but neither could my closest rivals.  I rode the rest of the course well and was very motivated to make up for Saturday’s mistake and to finish ahead of Jeff Wren.  Although ours is a friendly rivalry, each of us really wants to beat the other.

Lap 1 didn’t settle anything between Jeff and me, though it did ensure that neither of us would be contending for overall victory.  Dave Dineen, Jed Schleisner (Diablo Cycling) and PJ Braun (Heavy Pedal) were already gone and would finish in that order.  Timm Jacobson clung to 4th as Jeff and I pursued.  By Lap 2 John Grosz found a way around me, then Jeff Wren, and finally Jeff Hatton (Titletown Flyers), but he couldn’t close on Jacobson.  On Lap 3 I was happy just to follow Wren; no one was catching us from behind and I was content to settle things on Lap 4.

In his first career cyclocross race, Kurt Baehmann was unintentionally making things very interesting for Jeff and me.  Baehmann—a Masters 35+ Cat 4—was racing at the same time as Jeff and me but shouldn’t have been racing against Jeff and me.  He didn’t realize that, and when Jeff passed him late in Lap 4, Baehmann attempted to retake the position.  In his haste, Baehmann crashed right in front of us, forcing Jeff and me to take a wide line around him.  It was neck-and-neck for the next minute, then Jeff opened a little gap on a fast descent that ended with a gravel road crossing and a greater-than-90-degree left turn.  But I closed the gap on the first little climb back up the hill, then hit the gas and passed Jeff on the final climb.  I negotiated the sharp right-hander at the top, shifted into the big ring and hammered down to the finish line to take a hard-won 7th place out of 19 in my age group.  Jeff was 8th, followed by Team Pedal Moraine’s Steve Cummins.  Team Extreme’s John Norman completed the Top 10 just ahead of Troy Sable.  John Lichtenberg was 14th, so I got “revenge” on him today too!

It's all good fun, but you shouldn't be surprised if there's another knock-down, drag-out fight between Jeff and me next Saturday at Grafton.
Posted by Dave Hanrahan at 5:00 PM