A Bike Lane For West Bend?

If you wanted to bring a bike lane to West Bend, where would you put it? Before you answer, let’s look at how current state statutes and municipal code handle bike traffic.

As a limited-access freeway, US Highway 45 is off-limits for cyclists, but all surface streets are yours to use … plus the Eisenbahn State Trail, plus miles of city park paths, plus 99 percent of the sidewalks. Why not 100 percent? Well, you may not be aware that the State of Wisconsin prohibits adults from riding bicycles on sidewalks unless the local municipality expressly permits such activity. And West Bend does, except in areas that are zoned B-2 Central Business District. That means no riding on the sidewalks in downtown West Bend or in downtown Barton. (For my out-of-town readers, Barton is a neighborhood on the city’s north side that was a separate village until 1961.) The reason for the prohibition is obvious: high pedestrian traffic. It’s simply not safe to have cyclists and pedestrians sharing the sidewalks in those areas. West Bend’s other commercial areas don’t have the same limitation, and even very competent cyclists would agree that the sidewalks along Washington Street, South Main Street, and Paradise Drive can be better options than the streets themselves.

I understand that in larger cities with bigger traffic problems, or in places where geography demands that everyone share the only road, protected bike lanes make sense. But I can’t think of anywhere in West Bend that needs one and I am entirely unsympathetic to the notion of signed bike routes, as I think it would send a message to cyclists and motorists alike that such routes are to be used to the exclusion of other options.

Establishing a bike infrastructure in West Bend wouldn’t be a practical matter; it would be a political one. So, then, where do you want to make your statement? Take the busiest thoroughfares out of the equation, because you’ll never get the City Council to fund bike lanes there. Think small. Think Vine Street: 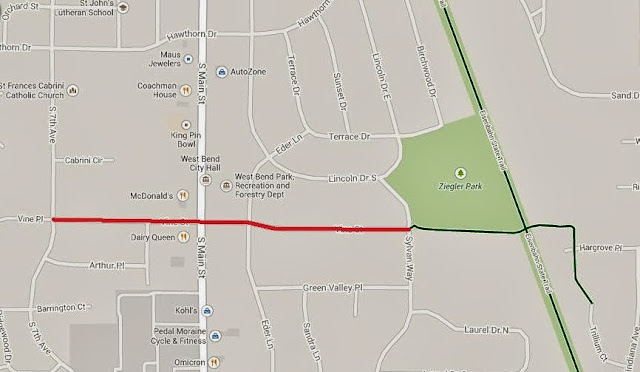 This is where I would start. Paint a bike lane from 7th Avenue to Sylvan Way and you will connect McDonald’s, Dairy Queen, City Hall / Police Department, Ziegler Park and Decorah Elementary School. And the lane would meet an existing bike/pedestrian path at Sylvan Way, connecting the street to the Eisenbahn.

Again, as a practical matter there isn’t a good argument for a bike lane on Vine Street. It’s already wider than average and is flanked on both sides by quiet sidewalks. But as a visible and enforceable place to take a symbolic stand, I think it is the best option. Your best option.
Posted by Dave Hanrahan at 4:30 PM