Did I Happen To Mention ... 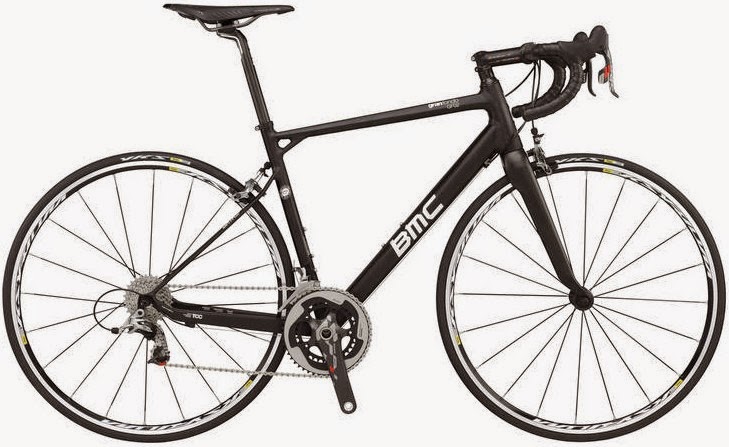 Those of you who have ridden on the road with me this year know that I bought a new bike at the beginning of March. For the rest of you, this is news. Is it weird that I haven’t written about this until now?

My BMC granfondo GF02 has an anodized aluminum frame, a BMC carbon fiber fork and seatpost, an Easton carbon fiber handlebar, and the full SRAM Red 10-speed group. The bike came with Mavic Ksyrium Equipe S wheels but currently they are on loan to my cyclocross bike. Fully assembled, the BMC weighed in at just slightly more than 15 pounds. It’s an amazing machine … but not $5,500 worth of amazing. That was the full retail price. I paid only $1,600 cash by buying at the end of the 2013 model year and from a bike shop that was going out of business.

I wasn’t really in the market for a new road bike, but I couldn’t pass up that deal. As the name suggests, the BMC granfondo GF02 is an endurance road bike with somewhat less aggressive geometry than bikes like my Raleigh Competition, which has gotten almost no attention this year. The BMC is simply a better fit for the kind of riding I do most. But the Raleigh is too nice to be relegated to only indoor trainer duty, and I keep thinking about turning it into a time trial bike.

The BMC isn’t just another bike in the stable, it’s the workhorse. As today begins, I have ridden 4,900 miles in 2014. Almost 3,200 of those miles have been on the BMC. I am not looking forward to replacing high-end SRAM Red components as they wear out, but so far I am enjoying the ride.
Posted by Dave Hanrahan at 2:00 AM