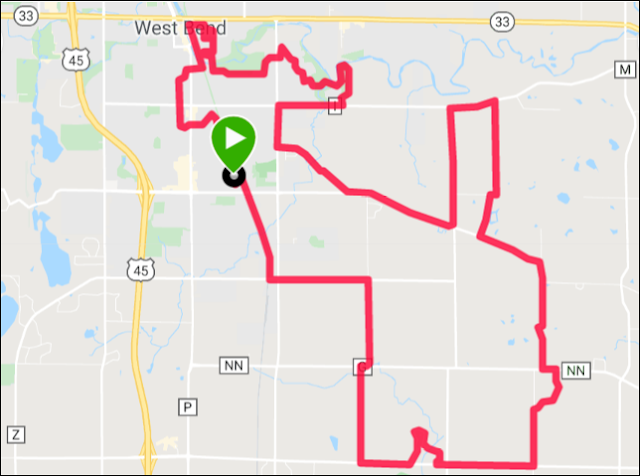 Tomorrow will be what people who say they love autumn are talking about: sunny skies over colorful trees and temperatures in the low 60s. Such people are not talking about the 9 weeks of autumn that remain after this weekend: 9 weeks of putrefaction to be arrested, eventually, by temperatures consistently below the freezing point. Such people seem to think that’s “winter,” but around here winter is an even more stark reality.

I am not one of those people who say they love autumn. In the last couple of weeks I have had to talk myself into my thermal gear and onto the bike for rides that have failed to inspire. It has just been work, and I have been willing to do it only because I don’t want cyclocross season to be over yet. Will tomorrow’s Tough Udder CX race in Dousman be my final race this year? Could be. When I know that my racing season is over I’m going to be OK. I’m not going to fight for every last ride and every last mile as I did in many prior seasons. I am now an even 100 miles away from making this a Top 10 season, and I will be content with that small achievement.

In recent weeks I have tried to compensate for a drop in outdoor miles with a rise in indoor minutes. I’ve made some nice changes to my home gym and it doesn’t seem as dreadful. I think I will be OK with more turbo trainer time than I have been able to endure in the past. I am also looking forward to going harder and heavier with strength training, which I have been doing in “maintenance mode” since early spring. It’s time not simply to maintain, but to make gains. Lastly, I’m eager to take on some new cross-training challenges, of which I will have more to say soon.

But today was about riding outside. I hopped aboard my road bike for the first time since breaking a spoke on October 10 and I really enjoyed the 25-mile route you see above. After my ride I got my cyclocross bike washed and lubricated for tomorrow. Off came the bottle cage. Off came the backup wheelset with the Continental Gatorskins that turned my Trek Boone into a road bike while the BMC was out of service. It’s a pure cyclocross bike again … at least for one more day.
Posted by Dave Hanrahan at 6:06 PM