The Future That Didn’t Come

We’ve reached the final month of 2020. I can safely predict that in these 31 days we won’t see any major changes to bicycling infrastructure in West Bend. And that means the city’s 2020 Park and Open Space Plan—a lengthy set of objectives, guidelines, and recommendations adopted way back on March 17, 2008—will have missed many of its targets. Now, municipalities make long-range plans all the time, and in this case the completion of the plan was necessary to keep the city eligible for certain state and federal grants. It’s hard to say how much of the plan was expected to reach implementation and how much was just pro forma busywork. But let’s not get stuck on that; let’s simply look at what might have been for bicycling in West Bend versus what is.

In the 2020 plan, a section called “Bicycle and Pedestrian Route and Trail System” proposed one big idea that lives on: a partnership with Washington County, other adjoining governments, and the Wisconsin Department of Transportation. That partnership led to the creation of Washington County’s master bike plan in May 2019. Of course, the new Washington County plan itself is only a plan. In a few years I might be poking fun at it for not going anywhere. But at least for now I can hope that it will fare better than the city’s gaze into the future. Flipping through the 100+ pages of the city’s 2020 plan, the first really tantalizing thing we see is Map 27: 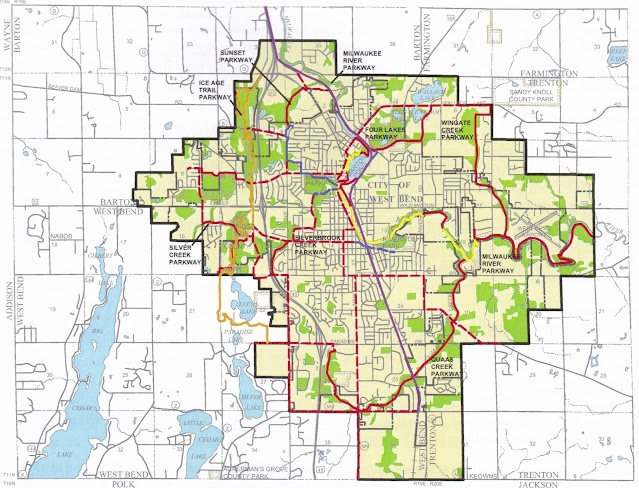 The Eisenbahn State Trail, shown in purple, was already the centerpiece of local bicycling infrastructure by 2008. The Riverfront Parkway is there too … shown in yellow and somewhat hard to pick out from a yellow background. All those wonderful red lines are bike routes that the city imagined we would have by now.

Solid red lines represent off-street routes, and just think about how amazing they would be! Imagine a 4-mile trail connecting Park Site O and Quaas Creek Park, intersecting with the Eisenbahn and with the Riverfront Parkway. Imagine filling the small gap in the Riverfront Parkway between Brookview Drive and River Road. Imagine a Milwaukee River Parkway extending eastbound toward Newburg and Ozaukee County. Imagine a Four Lakes Parkway taking you through Lac Lawrann Conservancy, where bikes are not welcome on the existing trails. Imagine a Wingate Creek Parkway as an alternative to busy River Road and Trenton Road, providing safe and enjoyable riding on the city’s east side. We got none of it.

We got a few improvements the 2020 plan didn’t anticipate, things like bike racks throughout the city and a few well-placed bike repair stands, but those efforts were driven by Bike Friendly West Bend and a handful of dedicated private citizens, not by city government. The most notable bike/ped achievement of government since 2008 was the construction of a sidewalk on River Road between Sand Drive and the high school parking lot. That’s a nice safety enhancement for the kids, but it’s hardly a network of non-motorized routes connecting every part of town.

So, now what? Should we forget about the 2020 plan when 2020 expires, or should we double down? It’s a very different looking Common Council than the one from December 2017, with new members eager to build trust and goodwill with their constituents. Will 2021 be the right time to make another push for bicycle and pedestrian infrastructure?