When I was a kid, the weeks leading up to Christmas truly were the most wonderful time of the year.  I loved toys.  Hot Wheels were a big favorite during my elementary school days.  At less than $1 apiece they were the go-to toy for every boy in town, a more-than-suitable stocking stuffer or birthday present.  And like baseball cards, Hot Wheels were eminently portable and formed something of an unofficial currency.  I was more interested in racing my cars than in trading them, though, and that was a bit of a problem.  Drag racing was easy to simulate thanks to gravity, but approximating Formula 1 or NASCAR was nearly impossible.  There were a couple of race sets that attempted to solve the problem with hand-operated levers or battery-powered pinch wheels that would propel the cars around the circuit, but they didn’t work as well as their commercials would have had us believe.

For me, hope arrived in the incredible array of toys available from the Sears & Roebuck catalog: slot cars.  Once I knew they existed, there was no going back to Hot Wheels.  Sure, I dabbled briefly with the rechargeable Sizzlers line—I owed the Hot Wheels brand that much for the years of joy it had given me—but soon AFX slot cars dominated my Wish List.  I quickly moved on to the more expensive but faster G-Plus series and built a massive racetrack.  From the ages of 11-15, slot car racing was a big part of my life.  Then my family moved to a new house.  The racetrack had to be broken down and packed away.  A few years ago I fired up the cars once again—not just out of nostalgia, but also to see whether my son would like them.  His reaction was lukewarm.  Everything went back into storage.

It’s fun to reminisce, but I’m not tempted to set up the slot car track yet again.  Cycling is my sporting passion now.  So it was with surprise and then disappointment that I came across this unholy marriage of the two: 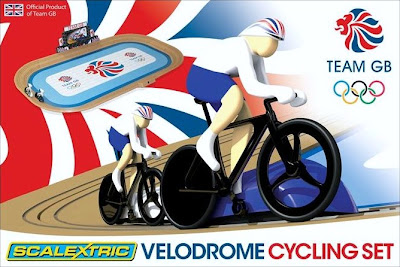 If the box hasn’t already convinced you of the complete absence of fun to be derived from the toy within, then check out the accompanying video.

I admit I don’t understand the many different flavors of velodrome racing.  Perhaps the Scalextric version provides for a reasonable pursuit, I don’t know.  Certainly, no one is going to model a miniature Graeme Obree and play with this thing for an entire hour.  And at £50—almost $80—this is an expensive toy!  With its 2012 London Olympics tie-in, maybe the idea was to create a toy for the British executive set: something whimsical and collectible but not really intended to be used.  If it had been up to me this toy never would have seen the light of day.  My idea?  Victoria Pendleton inflatable doll.  At just £16 the stores would be, uh, blowing them out.  But do mind our return policy, gov’nor, as there isn’t much of a used market.
Posted by Dave Hanrahan at 11:33 PM