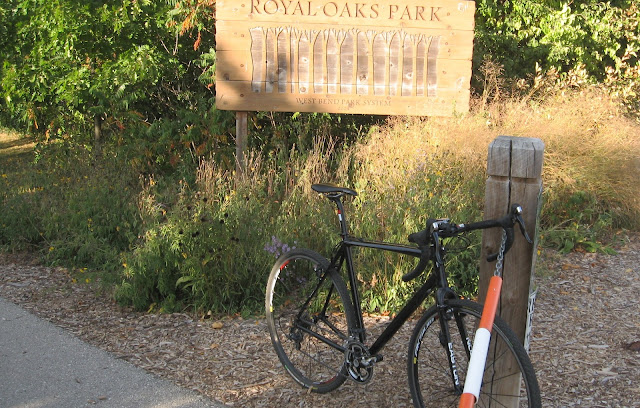 Members of the local cyclocross community have been meeting at Royal Oaks Park in West Bend for the last seven Tuesdays and at first there were some remarks about the hot weather making our practices feel out of place and not like “real” cyclocross.  Well, there were no such complaints today.  A cold breeze from the northwest and temperatures in the low 50s definitely made today feel like autumn.

I began my day with streaming coverage of the women’s UCI world championship time trial, in which American Evie Stevens took the silver medal behind Germany’s Judith Arndt.  As the defending champion, Arndt was the last rider to start, making for great drama as Stevens waited to see whether her time would hold up.  Next year for sure, Evie!  The men’s world championship TT is scheduled for tomorrow and I will watch it with great interest.  But for me the main event on Wednesday is CrossVegas, the first big date on the professional cyclocross calendar.  There will be streaming coverage starting at 10 p.m. Central, so tune in to watch defending US champion Jeremy Powers, Wisconsin’s own Brian Matter, and a host of other domestic and international men and women.

Between the TT and the cyclocross races on Wednesday, I will try to squeeze in a few practice laps at New Fane in preparation for Saturday’s WEMS race.  I’m pairing up with my Team Pedal Moraine teammate Steve Cummins for the 5-hour race.  It’s great to see WEMS returning to New Fane and it’s important to support a race so close to home.  Bill & Brittany Nigh are hosting.  I hope to perform well and will be very interested in comparing my lap times to those of more accomplished mountain bikers.  In WORS races, the higher categories usually have a more challenging course than the Cat 3s, but in a WEMS race everyone rides the same trails.  I’ll get a good feel for how far I have developed as a rider this year … and how far I still have to go.

Racing at New Fane on Saturday means no US Gran Prix of Cyclocross for me.  The two-day event in Sun Prairie will feature some of the same top-level pros as CrossVegas, as well as local pros and amateurs.  But with no WCA series points on the line, it’s a good event for me to skip.  I have a lot of two-race weekends coming up and neither my energies nor my finances are inexhaustible.
Posted by Dave Hanrahan at 8:30 PM