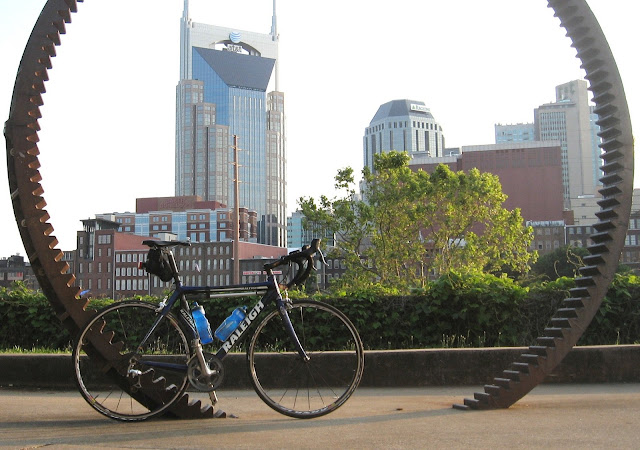 I’m back at home, safe and sound. It was a good business trip to Nashville. I did three bike rides while I was there: 27.75 miles on Monday, 28.75 miles on Tuesday, and 26.5 miles on Thursday. I would have liked to ride on Wednesday as well, but there was rain during much of the day and I just didn’t have a good window of opportunity. Still, those three rides kept my training on track.

I didn’t want the hassle of navigating, so I confined my rides to Nashville’s network of bike paths, bike lanes and bike routes. Nashville has its share of hills, and the bike paths aren’t completely flat. In the Midwest we’re familiar with trails in former railroad corridors, but Nashville’s bike paths tend to follow rivers and creeks. There are some steep climbs/descents in the ravines. The toughest climb—a section of Stones River Road now closed to motor vehicles—averages 6 percent for 500 meters but kicks up to 10-12 percent at its steepest point. There’s nothing like that on our Eisenbahn or Ozaukee Interurban.

Nashville’s cycling infrastructure, as I experienced it, had three distinct areas:


Nashville has done a lot to develop its riverfront in the last two decades. LP Field, home of the NFL’s Tennessee Titans, is a major attraction on the east side of the Cumberland River. There’s a nice bike/pedestrian bridge to connect the stadium to the central business district, and on each side of the bridge you’ll find bike share stations.

On Tuesday evening I learned that on Wednesday there would be a criterium around the football stadium. For a moment I actually toyed with the idea of buying the 1-day USA Cycling road license and joining the race as a Cat 5. But common sense prevailed. The risk of injury was unacceptably high. Imagine that phone call: “Hi, dear. I have badly injured myself in a bike race and I can’t drive, so could you fly down here ASAP to drive the car and me back to Wisconsin? It’s only 600 miles and ... ” Click! Re-dial. Busy signal (divorce lawyer).

It’s good to be home. Not super-thrilled about having to put on thermal everything for tomorrow’s Washington County Bicycle Club ride, but it looks like there are better days coming next week.
Posted by Dave Hanrahan at 8:18 PM