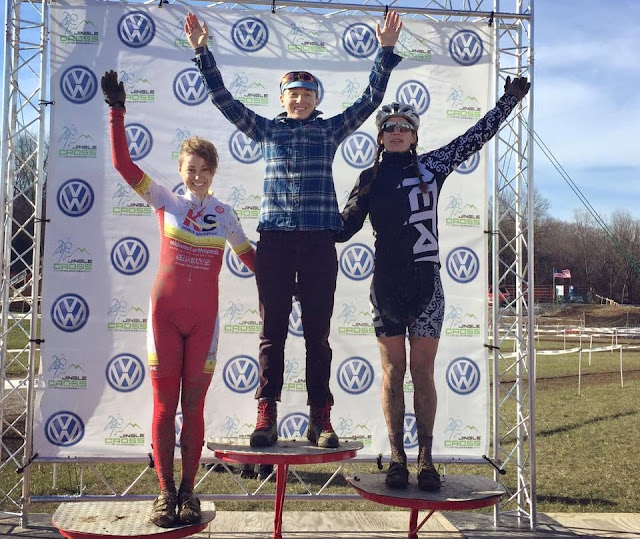 If you don’t think of Iowa as one of America’s bike racing hot spots, then you don’t know Jingle Cross: three days of racing, including a UCI C1 race for the pros on Saturday. What does C1 mean? It means heavy hitters like defending national champions Jeremy Powers and Katie Compton show up in search of prize money and UCI points that will be useful later at the world cyclocross championships. World and national championships aside, C1 events are second in prestige only to World Cup races. North America has just one of those: CrossVegas. Jingle Cross wants to join that illustrious company in 2016. If that happens, you'll see not just the top domestic professionals racing in Iowa City, but also the top international pros.

Of course, not everyone is a pro and Jingle Cross attracts a big field of dedicated amateurs. Many of my friends and rivals were in action over the weekend, but nobody put up a result as impressive as West Bend’s own Nicki Lock (Belgianwerkx). On Saturday, Nicki won the women’s Cat 2 race … in familiar company. Sharing the podium with her were Delafield’s Heidi Beck (Twin Six / Milwaukee Bicycle Co.) and Belmont’s Kayla Doan (KS Energy Services / MOSH / Team Wisconsin). Heidi is our state champion for 2015. Nicki had not beaten her all year, and Nicki was just 1-6 against Kayla. But on a muddy course on Saturday, Nicki had the right stuff. Congratulations!
Posted by Dave Hanrahan at 5:00 PM