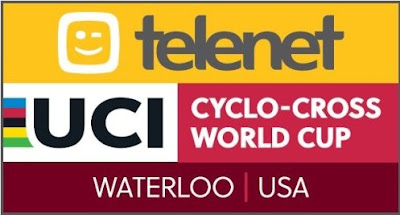 This was the biggest weekend of the year for cyclocross in Wisconsin. Today’s elite men’s and women’s races in the Telenet UCI Cyclocross World Cup were the centerpieces of three days of competition that included dozens of races for amateurs and professionals. Many of my friends and rivals competed, but I stayed home. Because I work overnight on Fridays, the Friday and Saturday races would not have fit easily into my schedule. And today’s World Cup races—I’ve had fun watching them before as a fan—were held in the rain on a muddy course. I understand why some people like slopfests, but they just aren’t for me. I stayed home, stayed dry, and watched the spectacle on TV.

If I do the entire Wisconsin Cycling Association cyclocross series, then I will get my fill of Waterloo anyway. The series goes to Trek headquarters on October 19 for the GP Jo Vanderaffe and on November 23 for the state championships. Throw in the Battle of Waterloo at Firemen’s Park on November 3 and maybe I should just have my mail forwarded there.

It’s disappointing that today’s weather was so rotten, but I’m more concerned about my training than I am about a missed opportunity to be a spectator. I didn’t ride outside yesterday or today, making this my first 0-for-2 weekend since June 15-16. It was still a 9.5-hour week, but I was hoping for 12 or more.

On the upside, I got a lot of other stuff done. I bought groceries, new shirts to wear at the office, and a couple of things for the house. I cut my hair, shaved off my whiskers, washed dishes, did laundry, binge-watched a show on Netflix that I didn’t particularly like but felt obliged to see through to the end, and was generally virtuous and productive.

I have cleared away every obstacle that might have prevented me from having a great time on the bike in the week to come … except the rain. There’s a lot more of it in the forecast. Monday and Tuesday look good, but it’s Saturday that really needs to be nice. I’m anxious to return to racing and the course at Humboldt Park in Milwaukee is a good one for me. I need dry conditions though, so my participation may be an 11th-hour decision.
Posted by Dave Hanrahan at 7:30 PM