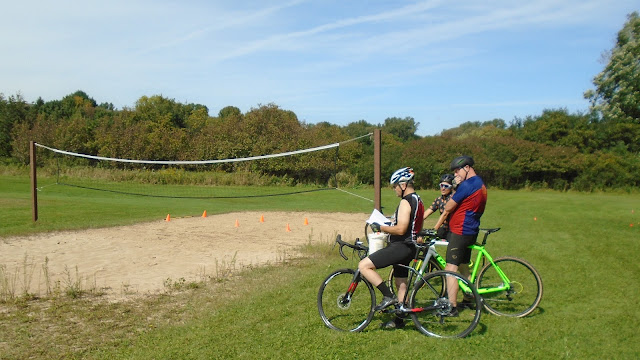 Seven years ago I had a little fantasy about bringing cyclocross to Ridge Run Park. It didn’t seem possible though, because Ridge Run at that time was a “no bikes allowed” Washington County park and not a City of West Bend park. Then the city acquired the park from the county and today my idea became a reality.

Four other racers joined me for a skills session that included starts, barriers, and a sand pit. We didn’t do a practice race like those we run on Tuesdays at Royal Oaks; today was all about technique. I think we’ll do something like this to kick off the 2020 practice season … probably on the first Tuesday next August when the temperature is likely to be higher than what most people find comfortable for a 30-minute race. Thanks to everyone who came out today! I hope you found the session to be valuable.
Posted by Dave Hanrahan at 4:30 PM