The Roads Not Taken

Following up on yesterday’s 50-mile ride—30 of which I rode with other members of the Washington County Bicycle Club, anxious to get outside more than a month before the club’s first official ride—today I headed out for a solo adventure of the sort that many of my roadie brethren wouldn’t enjoy.  I got out of town on the Eisenbahn State Trail, enjoying the crunch of gravel from Barton Park up to Lighthouse Lane.  Then I shot over to Glacial Blue Hills and took the Ice Age Trail and doubletrack down to Beaver Dam Road.  Climbing up Town Hall, I decided to check out Hi-Mount Road, a half-mile ascent to a dead end.  I had never ridden it before, knowing that it goes nowhere.  But I haven’t been climbing especially well yet this year, so I took advantage of the chance to practice.  After passing through Kewaskum I got another chance to climb as I approached St. Michaels.

But the pièce de résistance today was the ascent of Lovers Lane near Boltonville.  It’s a mile of the worst public road I have ever seen, ending in the shadow of the chapel of St. John of God on Highland Drive.  On this year’s Cheesehead Roubaix, Lovers Lane will be the first of eight unpaved sectors.  It’s so ugly that it’s beautiful.  And it’s eminently climbable on a road bike, but you do need to pick a good line along the badly rutted road.  The road kicks up noticeably for the final 100 meters and is reminiscent of the Kapelmuur in the Ronde van Vlaanderen.  Today I was inspired to take a picture: 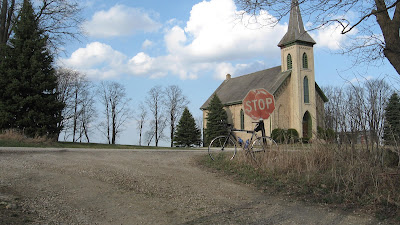 And for comparison, here’s the Kapelmuur: 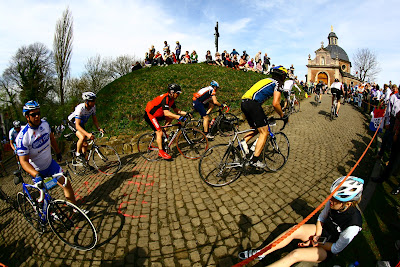 No, it’s not exactly the same, but this year’s improved Cheesehead Roubaix route will give its riders an even more authentic Spring Classics experience than previous versions.  Frankly, I think I’ve nailed it.  And it looks like attendance will more than double … if I can count on the Facebook event listing.  Word-of-mouth from last year’s riders is creating greater interest in the ride.  But there’s nothing to sell out and no limit to reach.  Check out the event flyer and if it sounds like your kind of fun, you’re welcome to join me on April 29.
Posted by Dave Hanrahan at 10:51 PM