For more than a decade the city of West Bend has debated the construction of a new bridge over the Milwaukee River to extend Trenton Road south to Decorah Road.  In mid-February the concept took a big step forward as the city issued a call for contractor bids.  Those bids must be submitted by this Friday.  The city will choose one—probably on or before April 15—and construction could begin as early as 2014 … or as late as 2016.  This map shows the location of the proposed bridge and roadway: 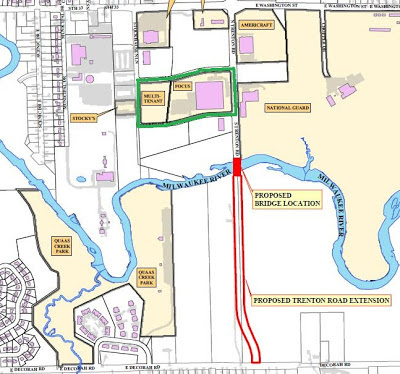 In general, the project should be a good thing for area cyclists.  Existing bridges at River Road and County Highway M are four miles apart, and between them the only place for a cyclist to cross the river is at Quaas Creek Park.  Some riders are reluctant to use the park bridge because of the coarse gravel that links it to Stocky’s.

But not everyone will be happy.  The dramatic increase in motor vehicle traffic on Trenton Road south of State Highway 33 will spoil the quiet business park that has been used for the last few years as a practice course for local criterium racers.  The course is marked in green in the map above.

Crit practice is going to be a big deal this year, with prizes and USA Cycling upgrade points on the line.  The series begins on April 2.  If you’re a road racer, take advantage of the opportunity.  In 2014, it might be gone.
Posted by Dave Hanrahan at 8:31 AM