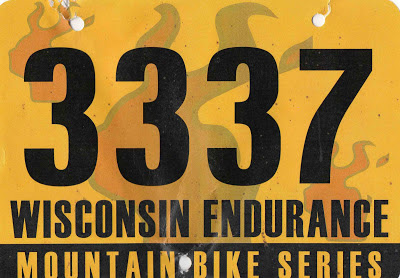 For me, the “Stump Farm 100” was really a Stump Farm 30, but the 30-mile race was all I wanted on Saturday in Suamico. I have nothing but admiration for the 60- and 100-mile racers; my comparatively short race was hard enough.

With a time of 2:07:24, the winner of the 30-mile men’s race was Drew Wilson of Rochester MN. Wilson is 30 years old, a USA Cycling Cat 1, and no stranger to the podium in mountain biking, road racing and cyclocross. In an “open” race—WEMS doesn’t separate riders by age or ability like WORS does—there was never any doubt that I would finish way down the list. I placed 23rd out of 39, with a time of 2:37:25.

All things considered, that ain’t bad. But it would have been nice to be more competitive with the other Washington County guys: Chris Tamborino of Expo Racing was 11th in 2:23:33 and Jeff Wren of Team Extreme took 16th with a time of 2:28:41. Jon Nehring, my Team Pedal Moraine teammate, was 31st in 2:45:15. April Dombrowski of Team Pedal Moraine was the women’s 100-mile winner.

My performance was an accurate indication of where I am at this point in the season: good on open terrain, a pretty fair climber but still sorely lacking in the singletrack, and durable but not especially fast.

At least I didn’t crash. On Friday at Tulsa Tough, a three-day criterium series in Oklahoma, Erica Allar did. Spectacularly. But it wasn’t her fault. Allar was just seconds from the finish line, sprinting for no worse than third place and probably the victory when she clipped a line of male racers who were staging for their race. I was outraged. There’s no way those guys should have been on the course while the women’s race was still in progress. And even though Allar was obviously hurt, it took a while for medical personnel to reach her. In fact, the race announcers had to use the public address system to appeal to them on Allar’s behalf. It is inexcusable that such a high-profile event would not have medical personnel just a few feet away from every critical point along the course.

I didn’t think Allar was going to get up, and I certainly didn’t expect her to continue in the series. But on Saturday she not only returned to the starting line, she finished in third place and was all smiles on the podium despite stitches in her face and knee, and plenty of road rash.

My photo editing software has an effective correction tool for red eyes, but nothing for black eyes.

Doing two races in the last week showed me where I am with my fitness and with my skills. I now have a big break before my next mountain bike event, the Subaru Cup on July 13-14. During the next five weeks I will continue to work on my fitness, of course, but improving my skills in the singletrack is just as important. I need to get back to at least once-a-week workouts on the mountain bike, and not just at New Fane where I can ride lots of clean laps without really being tested.
Posted by Dave Hanrahan at 8:00 PM