I Meant To Do My Work Today

This is getting stupid. Seems like every time I have mountain biking in my plans, the weather takes a bad turn. Last Friday I went to New Fane and found it too soft from a recent rain and, in a few places, still covered with puddles. I’m a good boy: I don’t practice on wet trails. I sat in the parking lot until my Team Pedal Moraine friends arrived and we spent two hours on trail maintenance, so the evening wasn’t a total loss.

This Tuesday wasn’t a total loss either, but wet trails again forced me to abandon my mountain biking plans in favor of a 50-mile solo road ride. I had good legs, and that solo ride set me up for a good performance on Wednesday. I decided to do the Ozaukee Bicycle Club ride from Cedarburg and I felt great, but less than 2 miles into the ride I hit a patch of bad road and my frame pump rattled loose. It should nestle under the top tube by spring tension alone, but it’s not a perfect fit and I try to secure it with a strap. After a couple of potholes, that strap was the only thing keeping the pump off the ground. I had to stop to reattach it before it got caught up in my wheels! Stopping on an OBC ride means you will never catch the front of the group again, but I had no choice. It didn’t take long for me to resume but I couldn’t close on the leaders. I worked hard, though, hoping that I could catch a straggler or two as ride cohesion broke down. At Mile 9 I finally caught a lone rider with TT bars on his road bike. I passed him and at first I thought he couldn’t lift his pace to match mine. I wanted nothing more than to work with this guy to bridge the gap to the next straggler and form a gruppetto that would stick together to the end. Hell, I didn’t know the route! With the leaders literally out of sight, I was just guessing. Fortunately I had found a new partner and together we reeled in a third rider just south of Port Washington. By that point I had recovered from the time trial effort that brought me back to the tail end of the ride, so I did most of the work on County Highway LL to Belgium. There we decided to ad lib our return route to Cedarburg, staying mostly on the Ozaukee Interurban Trail. Again, I did most of the work and I felt strong. It turned out to be a good ride in good company, but I’m left wondering whether I had the legs to stay with the leaders. From now on, I will rely on my CO2 device for such rides.

With two good road rides under my belt, I went back to New Fane this evening for some badly needed singletrack practice. And on my warmup lap, things were going pretty well. My lap time of 27:52 was right in line with the times I have been posting and I expected to be faster on the next one. Then this happened: 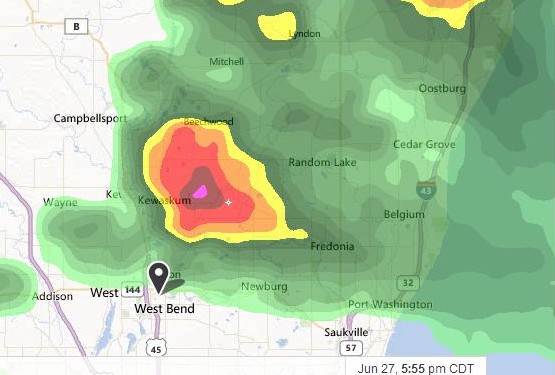 The timing couldn’t have been better: I had just returned to the parking lot. Still, it was disappointing. The thunderstorm blew in quickly and probably was gone before I got back to West Bend, but it dumped so much rain that the trails must have been compromised. And I’m still a good boy, so I’ll try again tomorrow.
Posted by Dave Hanrahan at 11:00 PM