When tomorrow comes I will be off to Suamico for the Stump Farm WEMS race. And I can’t think of “Stump Farm” without thinking of Eric “Stumpy Joe” Childs, Spın̈al Tap’s second drummer. You might remember that he died tragically, choking on vomit that may not have been his own. Stumpy Joe’s connection to mountain bike racing is uncertain at best, like so many details of his life, but I’m sure he would appreciate the spirit of any endeavor in which otherwise rational people assume the risk of serious injury or death and pay $30 to nullify the legal recourse they or their survivors might otherwise seek should misfortune befall them.

These are still early days in my 2013 racing program but I need to push myself a little harder. There is no training like racing and tomorrow’s race will be more about the exercise and the experience than it is about my place in the results. Becoming familiar with the trails during three laps tomorrow will be valuable preparation for the Reforestation Ramble on Aug. 25, a race in which I really want to do well. Still, tomorrow’s race is a competitive event and I will do my best, but my preparation for it has not been ideal.

My training week began on Monday with a much faster than expected ride at Belgianwerkx. I had good legs, so I didn’t mind hitting the gas from time to time even though I was coming off a WORS race on Sunday. On Tuesday I took something of a belated rest day: 30 minutes of singletrack skills practice at Glacial Blue Hills. Wednesday was a washout. I might have joined the Ozaukee Bicycle Club ride, but I considered the risk of rain too great. On Thursday I did a 35-mile road ride at an average moving speed of 18.1 mph. And earlier today I did this 18-mile ride on my 29er: 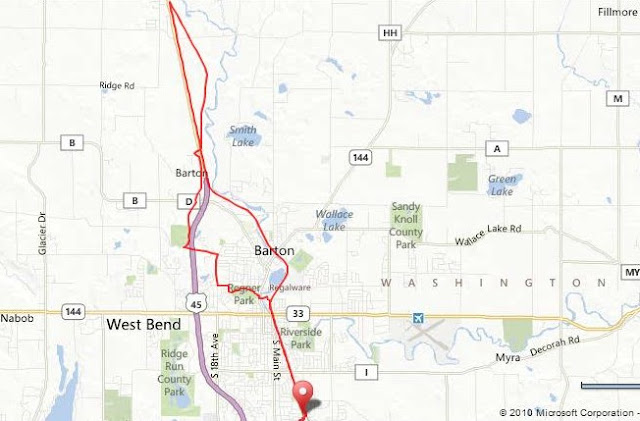 That’s a route I usually would do on the cyclocross bike, but I wanted to see how it would feel on the much heavier mountain bike. I felt slower but the actual numbers weren’t too bad, especially when you consider I wasn’t making a maximum effort on the afternoon before a race. My fitness is just OK right now. You’ll get an honest account of my performance at Suamico, whether it be good or bad.