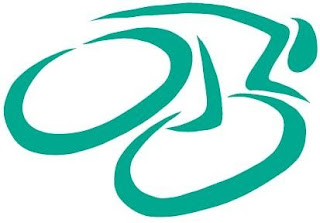 The Wisconsin Cycling Association cyclocross season kicked off in Sheboygan today and I overcame a couple of off-course obstacles to take a strong 4th place out of 16 in the Cat 4 Masters 45+ field.

Last night I just couldn’t fall asleep. My legs were twitchy and my stomach was telling me to eat but my brain really didn’t want to. At about 2:30 a.m. I ate a thick peanut butter and jelly sandwich and about 15 minutes later I was finally asleep. Less than 4 hours after that, I was up again to down a bowl of cereal and make my way to Sheboygan. Despite the lack of sleep, I didn’t feel bad but I availed myself of a small bottle of Coke as soon as I got to the race venue. At registration I received Unwelcome Surprise #2: a set of numbers to wear on my jersey sleeves. (In past seasons we wore numbers only on our backs.) I understand that the numbers are "totally Euro" and will benefit the race officials, but for racers this new requirement just adds to the pre-race preparations. For the rest of the season I will be able to pin on the numbers the night before the race; today the process ate into precious warmup time. I did some sprints at the end of my warmup to compensate a little for its brevity.

I was confident on the starting line and I got off to a good start. But it didn’t take long for eventual winner Jeff Abitz to pass me and ride away virtually unchallenged. I think I was so defeated by Abitz’s acceleration that I literally forgot about him and settled into the race for second place. I knew I was going well: Jon Antonneau and John Lichtenberg took turns passing me and each other but everyone else was falling off the pace. I have never beaten Antonneau but I have beaten Lichtenberg and with everyone else losing ground I was happy just to cooperate with them until the fourth and final lap. We weren’t trading pulls on the front as a breakaway group might do in a road race, but our wheel-to-wheel racing brought out the best in us. Antonneau increased the pace midway through the final lap and I pursued closely. Then we hit The Equalizer, Sheboygan’s infamous dirt hill. Racers in the higher categories may have ridden to the top of this beast but it was a run-up for everyone in my race. I couldn’t close on Antonneau, and Lichtenberg used the final ascent to sprint past me. Remounting at the top, Lichtenberg worked his way up to Antonneau’s wheel but ran out of racecourse. So did I. After losing time on the run-up, I was really charging over the last 500 meters. With another 500 meters to race, second place might have been mine. Like I said, I literally forgot about Abitz and I thought I was racing for the win. (Abitz also won the open Cat 4 race later in the day.)

Fourth place is my best finish ever in a cyclocross race. I felt strong despite inadequate sleep and inadequate warmup time. I thought about taking an afternoon nap but instead I found a little more gas in the tank and went out for a fairly brisk 25-mile road ride. My 2012 cyclocross season came unglued as the days got shorter and colder. My training mileage plummeted because I wouldn’t ride after a Saturday or Sunday race. This year I plan to ride in the afternoons to hold on to that deep endurance I get from high mileage.

You might recall that after replacing my home’s water heater and my lawnmower I was scrambling for a way to afford the new cyclocross season. Well, problem solved! My wife and I completed the mortgage refinance process yesterday and confirmed that the first payment on our new loan won’t occur until November. With no payment due in October, I can replenish the household emergency fund and still have enough money to cover my race registrations and travel costs. If I don’t make it all the way through the ’cross season, then I’ll probably blame the weather and not my finances!
Posted by Dave Hanrahan at 7:20 PM