Great Britain’s Brian Cookson was elected today to lead the UCI, cycling’s international governing body. The controversial reign of Pat McQuaid is over. Nearly a year ago as the cycling world began to digest the “reasoned decision” handed down by USADA in the Lance Armstrong case, I called for McQuaid’s resignation. McQuaid did not resign; I guess he didn’t see my blog post. Oh, well.

Early this month as other federations were announcing their support for the candidates, I took a more direct approach with USA Cycling to let it know where I stood: 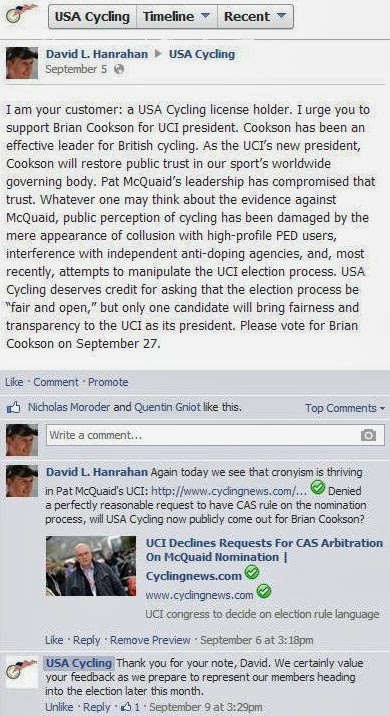 On Sep. 18, USA Cycling announced its support for Cookson.

Am I really taking credit for today’s victory? Of course not. But I am taking credit for caring enough to let my national federation know how I wanted it to cast its vote. I expected other Facebook users to do the same, but no one added a comment in agreement or in dissent.

I should not be surprised: America is a country where nearly 100 percent of the population complains about politics but an election is considered a success if 50 percent of the voters actually turn out. Most people feel like they cannot influence the process, so they don’t even try. And we see the same dynamic outside of politics. How many of us believe that we “just have to live with” the terms dictated to us by our employers or by the companies on whose goods and services we rely?

Motivated groups or even individuals can exert disproportionate influence simply by expressing their opinions. Decision makers know that most people, no matter how dissatisfied, will sit quietly on the sidelines. So, when somebody does speak up, that voice can seem louder and more powerful than it really is. You can count on me to keep using mine.
Posted by Dave Hanrahan at 8:30 AM