I had a very full weekend of cycling for early April. It began on Saturday morning with a drive around the Cheesehead Roubaix route to check road conditions. And that news is good: everything is shaping up according to schedule. Some of the unpaved roads are still closed, but the ones I could see were not too bad. On Saturday afternoon I did a 35-mile road ride. On Saturday evening I watched the Sunny King Criterium as it streamed live on the USA Cycling website.

Sunday began with streaming coverage of the Ronde van Vlaanderen, won in a four-man sprint by Fabian Cancellara. The race was marred by a series of crashes. Stijn Devolder suffered more than most, either getting caught behind crashes or crashing himself. Devolder’s heroic efforts to get back into the race moved Eurosport commentator Carlton Kirby to tears, but ultimately the Belgian road champion could finish no better than 86th, nearly 10 minutes behind three-time winner Cancellara.

But the worst crash at Flanders involved Johan Vansummeren, who collided at high speed with a woman who was standing on a traffic island in the middle of the road. Here’s a still image from a video taken by another fan, showing the woman, a man and a small child standing where no fans should ever be during a bike race: 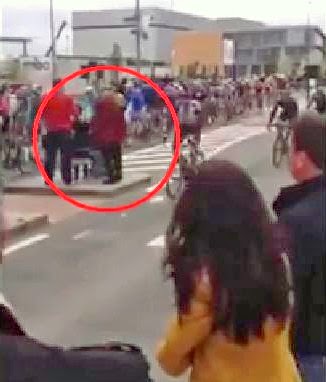 Just seconds later, Vansummeren and the woman were lying on the ground. Vansummeren was taken to the hospital for treatment of facial cuts and then released. The 65-year-old woman was placed in a medically-induced coma and remains in intensive care with life-threatening brain injuries. Belgian law enforcement authorities have begun a formal investigation into the incident.

I spent Sunday afternoon on the Eisenbahn State Trail, in the company of friends as far as Eden and then on my own for the trip back to West Bend. The trail surface was a little soft in places and the headwind really cut into my speed on the return. I averaged just 13.8 mph over 50 miles. That’s slow, but it was an honest effort. We’ll see what kind of legs I have on Tuesday when I get back on the bike after today’s scheduled rest. Sunday’s ride put me ahead of my 2013 mileage pace, and I ride better as I ride more so I’m hopeful that greater fitness is on its way.
Posted by Dave Hanrahan at 8:05 AM