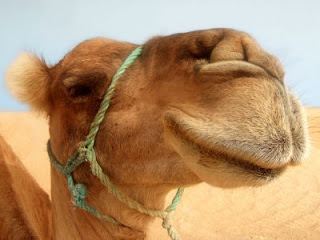 Io sono il cammello, goo goo ga joob!
Today I rode 64 miles, my 11th metric century this year. During the ride the temperature rose rapidly into the high 80s. We eventually hit 91 degrees today but the ride was over before then. My fluid intake during the ride was just a little more than two bottles. Toward the end I would have liked another cold bottle of sports drink, but I didn’t need it.

All the literature tells me that I don’t drink enough during my rides, but my body just doesn’t send that signal to my brain. You’ve heard, “Eat before you’re hungry and drink before you’re thirsty.” Believing that the sports nutrition people must know more than I do, I force myself to drink. But it’s rare that I feel thirst as a biological imperative. I took two “natural breaks” during today’s ride, so I was processing fluids in the usual way. What are the chances that I just don’t need as much as most other people?
Posted by Dave Hanrahan at 10:12 PM