This was a long day. It began with a bike ride. The discerning reader will notice that the 37-mile route Jeff Wren and I followed contained several miles of the 2013 Cheesehead Roubaix: 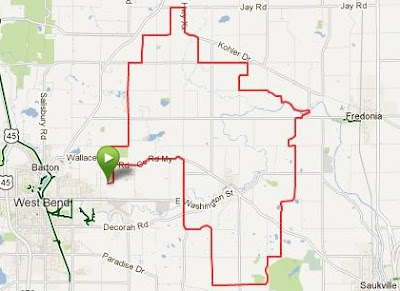 By following this route, Jeff and I were able to check out the condition of Cheesehead Roubaix’s first and last unpaved sectors. The infamous mile-long climb up Lovers Lane proved as challenging as ever. This picture was taken from the end of the climb and doesn’t even hint at the muddy, rutted horrors we had endured just moments earlier: 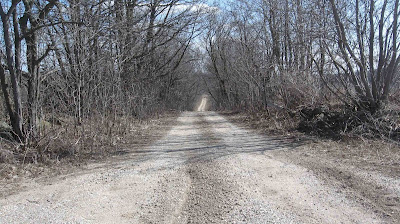 The last unpaved sector—that pretty combination of Blue Goose Road and St. Augustine Road southeast of Newburg—was rougher than we had found it a year ago. That would become a theme as we drove the entire route after our bike ride ended.

With cuesheet in hand, we made sure of the instructions and painted the CR symbol and directional arrows along the route. Everything was going … er, swimmingly, until we had to detour around a flooded section of Jay Road: 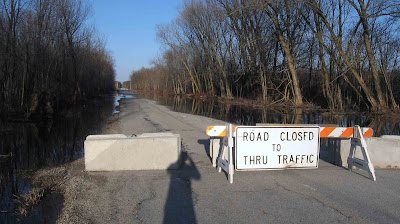 It was an easy and intuitive detour: one mile south, left turn, one mile east, left turn, one mile north to rejoin the route. But I don’t think any of that will be necessary on the 28th; the road appeared to be passable on a bicycle today, and unless we get a lot of additional rainfall we should be OK.

If you’ve seen the Cheesehead Roubaix cuesheet, then you know that I rate the unpaved sectors just like they do for the cobblestone sectors of Paris-Roubaix. Today I increased the difficulty ratings for Willow Valley Road, Clay Ridge Road, Sauk Trail Road, and St. Augustine Road. All four are significantly worse now than they were a year ago. Sauk Trail Road went from a relatively easy two-star sector to a washboarded, potholed, rutted four-star mess.

That said, everything is rideable. And I’m not the only one who thinks so. There were bike tire tracks all over the place. People are pre-riding the Cheesehead Roubaix route! How cool is that?

This week I made some adjustments to the route, and that means there’s a new cuesheet, map, elevation profile and Garmin GPS file today. If you’re coming to Cheesehead Roubaix—and why wouldn’t you?—then please get the new files here. The adjustments to the route became necessary when Belgianwerkx announced that it will sponsor a rest stop in Belgium! The shop is pulling out all the stops with food & drink and top-notch mechanical support. The Village of Belgium assures me that the bathrooms at the park will be open for us, so stop, enjoy a few moments’ respite, and let the Belgianwerkx staff know how much you appreciate their support. You may even see this guy turning a wrench, unless he’s turning his own pedals somewhere out on the route: